Nikolai Antropov is going to the KHL, Sport-Express reports. Several clubs in the running to sign him #nhlJets

Sports-Express.ru:  Antropov returned to KHL.   Via google translate so bear with me, but it appears to say he remains in North America to train but wants to return to the KHL after he got a taste of it during the lockout.  Update:  HC Barys Astana signed Antropov to a two year deal.

– According to Scott Brown, Senior Director of Corporate Communications for the Jets a couple of items of interest for Winnipeg fans as the game time for the November 29th away game against the Flyers has been moved to 10:30 am CST.  Also the four newest members of the Jets have selected new numbers as follows:  Devin Setoguchi 40, Michael Frolik 67, Matt Halischuk 15 and Adam Pardy 2.

Jets official site:  Frolik welcomes Stanley Cup to Czech Republic.  Always interesting to read what the players are doing with the Cup during their time with Lord Stanley’s Mug.  Fans in Winnipeg should be happy to hear how accommodating he was when meeting his hometown fans and also his comments about competing for a higher role in Winnipeg next season.

NHL.com:  Choosing hockey has proven right path for Copp.  It is not easy being a two sport athlete and it seems that the decision to focus on one sport is proving to be a solid decision for the prospect. 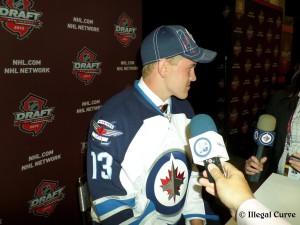 Hockey Canada National Junior Team:  Canada 5 Finland 3.  Over in Lake Placid, NY the Canadians played their first game and defeated Finland, backstopped by the Jets Eric Comrie who made 37 of 40 saves for the victory.  Neither Winnipeg prospect (Petan or Morrissey) ended up with any points in the win.  Canada takes on Sweden today who are fresh off a victory over Team USA.

Winnipeg Free Press:  NHLers must take stance on gay rights.  It is a sad testament to society when in the year 2013 this is still as big an issue as it is.  Gary is absolutely correct in saying if this was a racial or religious intolerance the world would be up in arms(you would hope), but because it is discrimination based on sexual orientation, there is less outrage and this is simply wrong.

Ottawa Citizen:  Jason Spezza on losing Alfie and potentially gaining the captaincy.  An interesting Q & A with the talented Spezza.

NHL.com:  Optimistic new owners take over Phoenix Coyotes.  The Phoenix, to be Arizona Coyotes for the start of the 2014-15 season, could turn out to be a great rival for the Jets franchise if they can prove viable in the desert.

Globe and Mail:  Stephen Walkom returns as NHL’s director of officiating.   At least he will have familiarity with the position.