Note:  The Illegal Curve Hockey Show will be on TSN Radio 1290, Saturday from 10:00 AM – 12 Noon, with a replay airing immediately upon the conclusion of the show, from 12 Noon -200 PM. Anton Thun, agent for Winnipeg Jets centre Bryan Little, will be interviewed at 10:30 AM. At 11:00 AM we will be covering the Blake Wheeler conference call live.  As always, your comments and participation via Twitter, is welcomed and encouraged.

Winnipeg Free Press:  Chevy locks up Wheels.  I had a feeling on Friday AM that this news would break at 5 pm and while I was off by a few hours, Jets fans everywhere were happy to see another long term committment to this team and city.  As stated above, the entire Blake Wheeler conference call will be carried live during the Illegal Curve Hockey Show on TSN Radio 1290 at 11 am (the show starts at 10 am).  If you miss it, fear not, as we will have the entire presser posted on Illegal Curve.

Winnipeg Sun:  Jets lock up Wheeler.  It is clear that the Minnesotan is happy playing in this city and especially enjoys the support from the fan base.  He will have six more years with which to further prove the value of this contract.

Yahoo Canada:  Top 30 starting goalies in the NHL.  Good news Jets fans is that Ondrej Pavelec cracked the list and is predicted to be higher after next season.  Bad news, he was ranked 26th on the list. 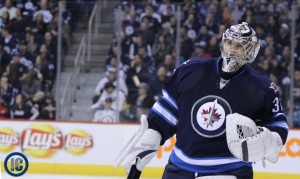