A reminder that the Illegal Curve Hockey Show will be on TSN 1290, tomorrow, from 10:00 AM – 12 Noon, with an immediate replay to follow from 12 Noon – 2:00 PM. With the Jets’ arbitration dates with Little, Wheeler, and Bogosian rapidly approaching, we will conduct mock arbitration hearings for all three players (Illegal Curve: Mock Arbitration Edition). Additionally, we will discuss the Jets signing Paul Postma and Eric Tangradi, break-down the Jets schedule (if it ever actually gets released between now and show time), and cover the rest of the news from the NHL. Join us on TSN 1290 starting at 10:00 AM

Winnipeg Free Press:  Winnipeg signs RFA Postma to two-year deal.  While fans are over eager to see one of the big 3 RFAs get signed, all these smaller deals are quite necessary to shore up the team’s depth.  Hopefully the Postman can continue to deliver (sorry couldn’t resist) and develop under the watchful eye of Charlie Huddy.

Winnipeg Free Press:  Olsen’s breakout beefs up organization’s depth at centre.  For a team looking for centre depth, any promise at this position will be greedily sought by fans.

Winnipeg Free Press:  Burmistrov gone but not forgotten Noel denies rift with Burmi.  One could hardly expect the Jets bench boss to air any dirty laundry during the presser he had with media yesterday.

Winnipeg Sun:  Prospect has that old Sutter style.  It is clear that there is a lot more depth this season than we have seen previously which inevitably means that guys need to compete harder to get noticed by the Jets brass.  After the forgettable season he had in the WHL last season, Lukas Sutter is trying to re-capture a spot as a top prospect within the organization.

Winnipeg Sun:  Jets hopeful making name for himself.  His route to the Jets has been a tad unexpected but Juho (he prefers Jussi) Olkinuora is looking to turn some heads. 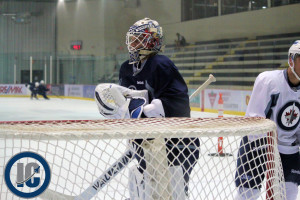 TSN:  Thoughts from Development Camp.  In addition to coach Noel’s comments about Alexander Burmistrov and the amount of rope he will be willing to give Scheifele and Trouba, the article concludes with a couple of comments from 2013 1st Round pick Josh Morrissey.

Illegal Curve:  Day 4 of Development camp audio.  Listen to coach Noel discuss: His thoughts on the development camp.  What is he looking for?  Thoughts on Lukas Sutter.  Talk about organizational depth.  Talking about remaining RFAs not signed.  His experience with Arbitration.  Talk about new players (Frolik, Setoguchi).  Burmistrov discussion.  How much rope might he give prospects (i.e. Scheifele & Trouba) to break into the lineup.  What can he see the KHL doing for Burmistrov’s game?  Does he expect to see Burmistrov in Jets uniform again?  Excitement for a full season?  Looking back at 48 game schedule.  Could exhibition games last season have changed the Scheifele narrative for last season?  Anything on next season’s schedule?  There is also audio from goalie prospect Juho Olkinuora.

NHL.com:  NHL schedule dependent on Olympic deal.  Deputy Commissioner Bill Daly hopes fans and media alike can remain patient as they wait with baited breath for the NHL to get the last of the Olympic details to be ironed out before they can see how their team’s schedule looks for next season.

L.A Times:  Kings’ Dustin Brown agrees to eight-year, $47-million extension.  I’m sure agents across the league took note as the Kings captain went sans representation and negotiated his contract extension by himself.  Of course when you consider the owner of the team a personal friend that might make it a little easier but big kudos to him for going that route.

Denver Post:  Matt Duchene signs 5-year contract extension with Colorado Avalanche worth $30 million.  Colorado fans certainly have to be happy seeing the face of their franchise locked up for an extended period of time.