For those who took yesterday off to enjoy Canada Day, here are links to all our Jets draft coverage.

Winnipeg Free Press:  Frolik could click with Kane.  Jets fans have been waiting some time to have some players that could match and compliment Evander Kane and we shall see if Frolik fits the bill.

Winnipeg Free Press:  He’s Mensa material.  For the Jets fans who are still unsure about the reasons for taking this young man, here are some of the reasons that Winnipeg went with the Calgary native.

Winnipeg Sun:  Jets draft pick hopes to make mark in net.  Eric Comrie is a likeable young man who seems eager to take his place as a Comrie playing in the NHL.  While he is aware of the things he needs to do to get to the NHL, he seems confident that he will be able to get it done.

Winnipeg Sun:  Now for the hard part for Jets GM.  With the draft over, fans are going to want to see names like Bogosian, Wheeler and Little signed to long term contracts sooner rather than later. 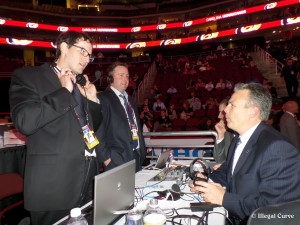 Winnipeg Sun:  Give the kid a chance, Jets fans.  I believe the angst stems from the desire to win now versus winning later.  As I counselled on Saturday’s Illegal Curve Hockey Show on TSN from the NHL store in Midtown Manhattan, fans needs to be pragmatic and understand that this build will not be quick.

Sportsnet:  Jets go bold with picks.  Looks like the Jets are getting some kudos for their moves.  What are your thoughts?

TSN:  Looking back (video).   Craig Button talks about the Jets first round selection and what a future pairing with Trouba might look like.