It was a crazy day in Newark yesterday.  We have a ton of Jets content on site.  Not all of the new Jets were in the Prudential Center but we got audio from the following players and video from Jets GM Kevin Cheveldayoff.

Winnipeg Free Press:  Drafting done, now time for development.  The Jets made a lot of moves to re-stock the cupboard and it will likely be a few years before we see all of the results of this work.  Will fans be patient enough to wait? 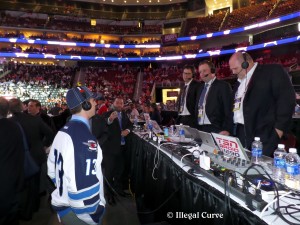 Winnipeg Free Press:  Jets pick up Frolik, Lodge and Lipon in third round.  There was a considerable buzz in the air when the trade was announced inside the Prudential Center.  Many Jets fans feel this finally gives Evander Kane a proper right winger to play with.  Considering the price it wasn’t a difficult choice for GM Cheveldayoff to make.

Winnipeg Free Press:  Jets raise eyebrows with Morrissey pick.  The reaction on the twitterverse was immediate and pretty clear as fans were not happy with the selection.  Not because of the player, but because they felt (which they do) that the Jets needed additional fire power up front.  However GM Cheveldayoff obviously has a plan in mind for his team, especially considering he is a left shooting defenceman.

Winnipeg Free Press:  Jets fans gather for draft day.  Sounds like it was quite the party at the Shark Club as our own Drew Mindell was broadcasting from the bar.  Both Mark Stuart and James Wright joined the festivities.

Winnipeg Sun:  Burmistrov bolting Jets for KHL?  Is this still much ado about nothing?  Who knows.  We will likely find out relatively soon.