Jets news: Catching up with the Jets. Available Vigneault has to be tempting. Change of scenery might be good for Alex Burmistrov.

Note II:  Stay tuned to Illegal Curve as we celebrate Winnipeg Jets Contract Week all week long.  Richard will be breaking down some of the contracts and decisions that GM Kevin Cheveldayoff will need to make as he figures out his roster for the 2013-14 season.  Third up, RFA Blake Wheeler.

Winnipeg Free Press:  Catching up with the Jets.  Taking a look at what some of your favourite players are up to right now as well as other off-season news.

Winnipeg Sun:  Available Vigneault has to be tempting for Winnipeg Jets.  Perhaps after the firing in Vancouver there isn’t as much joy in Coach Noel’s joyland these days.  While Alain Vigneault is a known commodity to the True North organization, would they jump at the chance to renew this relationship if it meant discarding coach Noel? 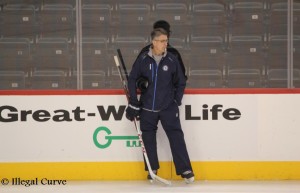 Winnipeg Sun:  Change of scenery might be good for Alex Burmistrov, Winnipeg Jets.  There doesn’t appear to be a more polarizing figure amongst Jets fans these days than the young Russian centre.  Some point to his strong defensive play and lack of quality linemates while others suggest his east/west style of game is all sizzle with little substance.  Sounds like Burmistrov himself was surprised to see the headline proclaiming he wanted out of Winnipeg as he took to instragram and wrote “Ne, ne slyshal” which roughly translates to “no, I hadn’t heard”.

Pittsburgh Post-Gazette:  Things quickly turn out all right for Penguins.

Pittsburgh Tribune:  It’s about time for these Penguins.

Ottawa Sun:  Back to reality for Spezza.