Winnipeg Free Press:  Chevy’s choice – Stick with Noel or pursue Vigneault.  Since AV remains with the Canucks the point is moot, for now.   What do you think?  Should GM Cheveldayoff given his coach a more ringing endorsement when given the opportunity? (Question 3 in his End of Season presser). 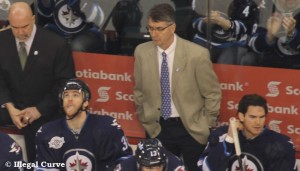 Yahoo Canada:  Mark Scheifele has a massive night.  The Jets prospect had back-to-back five point nights as he helped the Colts storm back from a 3-1 deficit.  His four 3rd period goals helped to give Barrie a 3-1 series lead and he solidified his hold on the OHL point lead (39 points – 15 goals, 24 assists).  Game 5 goes Friday, May 10th in London.

Part 1:  Paul Edmonds (Goldeyes talk to open the show at Shaw Park).  Interview with Shawn Simpson of The Team 1200.  Interview with Sean Fitz-Gerald of the National Post.  Breaking down the Habs/Sens, B’s/Leafs and Pens/Isles.

Toronto Star:  Maple Leafs lose heartbreaker, but what a night of hockey.

L.A. Times:  Kings beat Blues, 3-2, to move within a win of advancing in playoffs.

St. Louis Post-Dispatch:  Blues are on the brink.

Detroit Free Press:  Howard did it all, but Wings still lose in OT.