Winnipeg Sun:  One great sports city.  I agree with Paul that Winnipeg is a fantastic city to enjoy the sports scene and there is also no doubt that the landscape looks radically different now than it did when he first began.  Even just a comparison between 2013 and 2010 is significant enough.

– Jacob Trouba had an assist in a 5-1 USA win over Latvia; 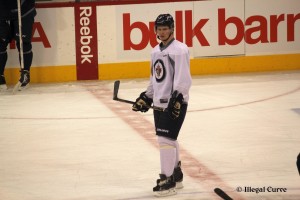 OHL:  Game 2 in the books as London wins 4-1 over Barrie (boxscore).  Jets prospect Mark Scheifele didn’t get any points in the loss and finished the game -2.

Chicago Sun-Times:  Blackhawks’ No. 1 line not on top of its game.

Montreal Gazette:  An embarrassment in every way.

Vancouver Sun:  These Canucks showed no push back or resolve.