Jets news: Sticking to his BLUEPRINT. Jets talk but make no deals at deadline. Down the stretch they come. Waiver wire pickups. Dustin Byfuglien is the answer on right wing. Jets open Jacob Trouba door just a crack. claim centre Santorelli off waivers, Antropov on shelf.

NHL news: Right now, the Edmonton Oilers are in the playoffs. Newcomers lift New York Rangers to 6-1 rout of Penguins.

Note: Make sure to @ tweet @illegalcurve with your guess during tonight’s game you can win IC Gear by participating in our twitter Game Winning Goal. Remember that for your vote to qualify you must send in your guess by hashtaging (#) our Game Winning Goal (GWG) contest. (i.e. #ICGWG Tangradi).

Winnipeg Free Press:  Sticking to his BLUEPRINT.  The heat might be temporarily off GM Cheveldayoff but he is going to have a lot of work with all the contracts he has to negotiate this summer.

Winnipeg Free Press:  Jets talk but make no deals at deadline.  Considering the inflated prices you pay for players sometimes inactivity is the best move possible.  Of course that is easier said than done since you often get vilified for failing to make a move.

Winnipeg Free Press:  Down the stretch they come.  We are in the final laps of this race and with 10 games remaining the Jets are going to need to go on a decent run to ensure a post season position.

Winnipeg Free Press:  Waiver wire pickups.  The Jets have certainly not been afraid to claim players via the waiver wire.

Winnipeg Sun:  Dustin Byfuglien is the answer on right wing.  The subject of much debate all season long will we see Big Buff at forward tonight against the Canadiens? 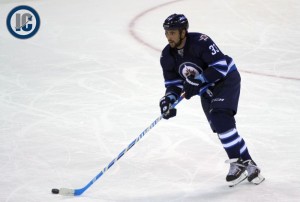 Winnipeg Sun:  Jets open Jacob Trouba door just a crack.  Paul had a chance to speak with Trouba’s coach.  Sounds like it might be the slow development plan after all.

Winnipeg Sun:  Claim centre Santorelli off waivers, Antropov on shelf.  It was an underwhelming day for Jets fans.  One waiver wire pick up and no trades.  The player many expected to potentially see on the move was hurt against the Rangers and will be out of the lineup for next couple of weeks.

– Adam Lowry has signed an ATO (Amateur Try Out) with the St. John’s IceCaps.

Yahoo:  Zach Hall, Mark Scheifele bail out battered Barrie in opener vs. Oshawa.  While all Jets fans have been focused on the 2012 1st round pick, Winnipeg’s 2011 1st round pick played Game 1 of the Eastern Conference semifinal of the OHL playoffs.  Nate Sager breaks down all the action from last night’s win over Oshawa and the Generals attempts to drive Scheifele nuts.

Montreal Gazette:  Bergevin talked trade, for naught.  With the way the Habs are positioned (2nd in the Eastern Conference) it is hard to argue the value of messing with team chemistry.

Montreal Gazette:  Flyers post comeback win over Habs.  The Jets had the luxury of time off while their rivals tonight had a tough game against Philadelphia last night.

Edmonton Journal:  Right now, the Edmonton Oilers are in the playoffs.  Taylor Hall had a big night (five points) as he led his Oilers past their provincial rival Flames in a 8-2 drubbing in Calgary.

TSN:  Several trades made just before NHL trade deadline.  Good thing that tradecentre started at 7 am.

NHL.com:  Team by team breakdown.  There wasn’t much action for most of the day but a flurry of activity as the deadline came to an end.