Winnipeg Free Press:  Jets Burmistrov will have room to grow.  Which is why his development path should begin anew with the Jets and why you can expect Scheifele to start in Barrie.

Winnipeg Free Press:  Scheifele expects to earn his keep.  This kid is saying and more importantly doing all the rights things so far, both at the Young Stars Tournament and now at the Jets 1st training camp, but all indications seem to have him returning to junior to continue his development. 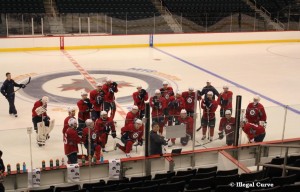 Winnipeg Sun:  Noel mum on split-squad lineups vs. Jackets.  Apparently we can expect the stronger team here in Winnipeg, which is good news as I’m sure everyone wants to see this franchise start with a victory at the MTS Centre.

After the jump Day 2 at camp was chiller, Jones on meeting Pear Jam’s Eddie Vedder, Jaffray keeps overcoming, Aebischer getting noticed, the Globe and Mail looks back at first training camp weekend in Winnipeg in 16 years, Jets scorers feeling the pressure and honouring Rick Rypien.

Winnipeg Free Press:  Players get bit of a breather on Day 2.  Without the crowds it reverted to a standard NHL training camp day.

Winnipeg Sun:  Jets hopeful Jaffray keeps overcoming.  Will he get one of the final forward spots?

Winnipeg Sun:  Goalie Aebischer getting noticed by Jets.  Seems to be quite the fast decline from Stanley Cup to tryout.

Globe and Mail:  Winnipeg Jets’ first practice ‘awesome’.  The entire atmosphere this summer (but specifically this weekend) has been without parallel in Winnipeg’s history.  Every step of the way until the October 9th home opener against the Habs (and really every step of the way this season) will be a new, exciting foray back into the NHL realm.

Winnipeg Sun:  Pressure’s on for young Jets.  When Bryan Little was at the podium he seemed confident that the Jets would be able to have enough scoring punch this season.