Winnipeg Free Press:  First-goal curse hits Jets.  Even worse is the Jets seem to give up that first goal quickly, so it sucks the energy out of the building almost immediately.

Winnipeg Free Press:  Parade to penalty box kills Jets momentum.  You just cannot afford to take the penalties the Jets took in the second half of the 2nd period and expect to win the game.  The amount of energy they had expended as the period concluded was evident by their sluggish start to the 3rd.  Once again they gave up a quick and momentum sucking goal to the opposition. 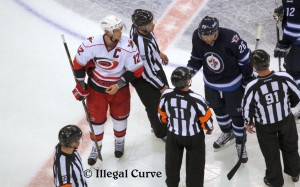 Winnipeg Free Press:  Big Buff continues to come up short.  Buff can easily be the best player on the ice and it would be impossible to get him to agree that he should be used less to conserve his energy.  Part of the responsibility of a coach is getting the best out of your players so it is imperative that coach Noel gets Buff working optimally.

Winnipeg Free Press:  Southeast Division tightens as Hurricanes beat Jets 3-1.  The positive that can be taken is the Jets still have one of the easier schedules of their games remaining.  Many of their Southeast division opponents still have multiple dates with Boston, Pittsburgh and Montreal.

TSN:  Jets lead but Southeast Division still up for grabs.  Perhaps heading on the road for a few games will be just what the doctor ordered for this team.  According to Sports Club Stats the Jets playoff odds after the loss to the Hurricanes dropped them 13.8% to 56.7%.

Winnipeg Sun:  Canes pound Jets.  It was just a terrible loss for the Jets who continue to struggle against the Southeast division (Seven wins and seven losses).  They have had opportunities to put the Capitals and Hurricanes well behind them and have failed to show that killer instinct.

Winnipeg Sun:  Jets couldn’t get a handle on Hurricanes’ stormy momentum.  I spoke to Ondrej Pavelec following the game and we discussed the penalties the team took in the 2nd period and how that impacted the team.  (You can hear his comments below).  Has to be disappointing to have such discipline against the Penguins on Thursday and then do the exact opposite against a division rival.

Jets on a Deadline – Hurricanes 3 Jets 1: 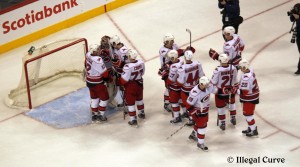 CBC:  Taylor Hall breaks Gretzky’s fastest hat trick record, Oilers blank Canucks.  Something remarkable when you can say you have eclipsed a record held by the greatest player of all time.

Pittsburgh Post-Gazette:  Crosby goes down, but Penguins keep streak going.  It was a horrific looking injury to the best player in the game.  But somehow these Pens just keep winning as they buried the Islanders for their 15th straight victory.

Globe and Mail:  Why Huberdeau stands out among NHL rookies.  Been a decent rookie crop this season but Huberdeau has stood one when we have watched the Jets take on the Panthers this season.