Jets news: Farm crop will yield little. If Jets can’t win this one, they might as well pack it in. Jets in Turtle Derby. Jets goalie Pavelec wants to play every game. Time to kick off best stretch of the season.

Note:  Tune into the NHL Mid-Week Show on TSN Radio 1290 on Wednesday from 7 pm to 9 pm as the guys discuss all the latest NHL news.  Guests:   David Poile (Nashville Predators GM).

Note II:  Make sure to @ tweet @illegalcurve with your guess in our contest.  During tonight’s game you can win IC Gear by participating in our twitter Game Winning Goal contest. Remember that for your vote to qualify you must send in your guess by hashtaging (#) the Game Winning Goal (GWG) contest. (i.e. #ICGWG Bogosian).

Winnipeg Free Press:  If Jets can’t win this one, they might as well pack it in.  Being able to take care of the opponents you should beat is what a playoff bound team does.  The Jets gave the Panthers life last time they played and they cannot afford to make the same mistake this time around.

Winnipeg Free Press:  Farm crop will yield little.  The cupboard has run pretty, pretty, pretty bare and GM Cheveldayoff will have to do his homework for the 2012 Entry draft.

Winnipeg Sun: Jets in Turtle Derby.  Just imagine if the Jets were able to win the Southeast Division.  Firstly the banner would be amazing hanging in the MTS Centre.  Secondly if this team had a home crowd to start the post season against the six seed, they could do some damage.

Winnipeg Sun:  Pavelec wants to play every game.  Whenever I’ve asked Ondrej about being tired he always says that he is happy to play as many games as coach Noel will let him play.  You really do get the sense that he would like to play all 48 games if given the chance. 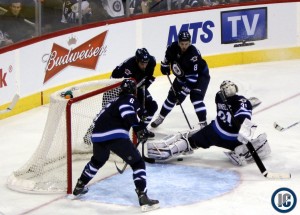 Winnipeg Sun:  Time to kick off best stretch of the season.  Time to prove their mettle.  Can this team make the playoffs?  They needed to beat the Capitals and came out flat and they certainly cannot afford to have a similar streak this weak against two Southeast division rivals, one of whom they play twice.

Illegal Curve:  Coach Noel from Del Boca Vista Phase III.  Status of Byfuglien.  Concern over snowstorm in midwest.  Meech possibility.   Miettinen maybe in with Jokinen.  Expectations from goalies.  How many power play goals per game do they have to score to get to 45,000?  Part Pavelec plays in PK.  Does the group have more confidence playing on road due to last trip?  Divisional games.  Best way to get into the playoffs?

Sun Sentinel:  Theodore out 5-6 weeks with groin tear.  While the division seems winnable, doing so without a proven goalie is going to be difficult.

Miami Herald:  With goalie situation tenuous, fans clamoring for young Jacob Markstrom.  It is either that or go back to goalie coach Rob Tallas.

TSN:  New rules for NHL draft lottery.  Depending on how this road trip goes, Jets fans should pay attention to the new rules.

Globe and Mail:  Approval of realignment hinges on playoff format.  The biggest stumbling block is how the NHL playoff format gets “improved”.  Personally I love the current format but doing it will be difficult if they had a 14 and 16 team division.  Of course the biggest elephant in the room not being discussed is how relocation of a team to Quebec City might throw a wrench into these carefully crafted plans.