Winnipeg Free Press:  Watch your back.  While some losing next year may cause a grumble or two, fans are probably more likely to take out their anger on individual players.  My guess is this team gets a 1 year honeymoon, free from major criticism from the masses.

Winnipeg Sun:  Facing Canucks will have special meaning for McCambridge.  While many Jets 1.0 fans still hold hate in their heart for the Canucks (92 + 93 playoffs losses plus Peca’s hit on Selanne), the NHL/AHL connection these two cities had has created a sort of sibling rivalry, that could really blossom into a great future NHL rivalry when the Jets rejoin the Western Conference. 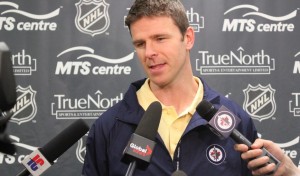 Winnipeg Sun:  Gregoire making decisions difficult for Jets.  The local Winnipeg product has been playing well, but by his own admission, he is one of the oldest guys at the Young Stars Tournament.  It will be more telling when he goes up against the NHL guys at training camp this weekend.

After the jump the Jets take flight, Winnipeg hockey culture created by fans not PR firms, DePape wants to show all-around game, Jets spend big bucks on blueline.   In ‘Around the NHL’ news, former Nordiques owner still talking about how QC could have had an NHL franchise before Winnipeg.

Winnipeg Sun:  DePape wants to show all-around game.  Well we know he can fight.  He looked decent in the Tournament but won’t see action in the finale vs. the Canucks.

Winnipeg Sun:  Big bucks on Jets blueline.  Are we the Devils of the North?  With the lack of a marquee forward this team has solidified it’s back end, and the way it’s built, the Jets can be strong in that area for years to come.

Winnipeg Free Press:  Jets take flight.  If we thought the Jets rookie open practices were busy, I can’t wait to see the crowds that come out to the two open training camp practices.

Uptown:  Hockey culture is created by fans, not PR firms.  He’s right.  The Jets are 100% ingrained into the very fabric of this community.

NBC Sports:  Former Nordiques owner says NHL is returning to Quebec City soon.  Marcel Aubut would be wise to focus on his city, and stop mentioning that if his city has an NHL ready arena, they would have had a team before Winnipeg.  Hypothetical’s are great but as of the 2011/12 season, the Jets are back.  Now Peggers’ will be overjoyed to see hockey return to Quebec City, but he may want to focus on building an arena, and not on which city deserved an NHL franchise.