Jets news: On the outside looking in. Leading the league in missed shots. Sniper Kane finally hits the target. Hainsey’s bad luck streak continues. It’s make-or-break time for Winnipeg. Frightening trip into the basement. Talks between True North and WHL team break off.

Note:  Stay tuned to @illegalcurve on twitter as we will be covering the Jets final home practice this morning at the MTS Centre before the team heads off on their 10 day road trip.

Winnipeg Free Press:  On the outside looking in.  The Jets have a steep hill to climb if they want to get back into the race and it won’t be easy as they leave the formerly friendly confines of the MTS Centre for a road trip that will see them play nine of the next 11 games away from home.

Winnipeg Free Press:  Leading the league in missed shots.  Watching the game from above you cannot help but notice the many shots the Jets take that are shot wide of the net.  The Jets are currently leading the NHL in missed shots, not exactly a stat coach Noel and company will be very pleased with.

Winnipeg Sun:  Sniper Kane finally hits the target.  Alexander Burmistrov continues to work well with Evander.  Kane showed good effort to get the shot off while falling and gave the Jets an all too brief lead. 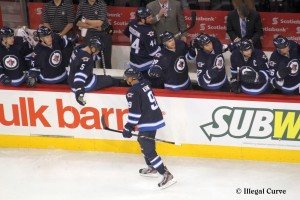 Winnipeg Sun:  Snapshots – Hainsey’s bad luck streak continues.  He still has yet to score on the opposition in the two seasons he has played for the Jets although he has had 3 pucks go into the Jets net off his body.  Kirk also covers the Jets missing the net, an Enstrom update, Stuart’s 400th game and WHL on the horizon.

Winnipeg Sun:  It’s make-0r-break time for Winnipeg.  In a shortened season a four game losing streak is even more magnified and while the Jets were loath to say it is make it or break it time, they are well aware of how important it is to immediately turn things around as they get ready to start on the road trip in Buffalo.

CBC:  Frightening trip into the basement.  Just as the MTS Centre has perhaps lost some of its magic for the home squad, perhaps it is time to debunk the notion that this team cannot win on the road.

Winnipeg Free Press:  Talks between True North and WHL team break off.  It is a natural fit for the city and you would have to imagine that teams that come to play Brandon would like to be able to justify the trip by playing a 2nd WHL team in Manitoba. 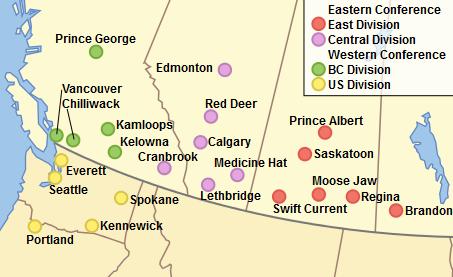 Jets on a Deadline Bruins 3 Jets 2:

Illegal Curve Post-game podcast from the Press box: Host Drew Mindell and Analyst Richard Pollock break down the Jets play against the Bruins.

The Telegram:  IceCaps flattened by Pirates.  St. John’s was hoping to start a winning streak after a Friday night victory over Manchester which ended a five game losing streak.  Instead a 6-1 loss to Portland adds another loss to their total and keeps them in the Eastern Conference basement.

– The Barrie Colts dropped a 5-3 decision last night but Mark Scheifele continues his hot hand as he scored another goal, although he was a – 2 on the evening.

– Adam Lowry leads the Broncos in goals, assists and points and his Swift Current team faces off against Kootenay this afternoon.