Note: We are at the conclusion of the eighth week of the Team Illegal Curve Beard growing competition as Ezra and Drew help support the Heart and Stroke Foundation of Manitoba in conjunction with the Festival du Voyageur in the 31st annual beard growing contest. Every Friday we will be giving readers an update on the beard progress and here is Drew’s growth from Week 7 to Week 8:

Note II: Tune into the Illegal Curve Hockey Show on TSN Radio 1290 as the guys discuss all the latest Winnipeg Jets and NHL news but with an earlier than normal time (7 am to 10 am) on Saturday due to the Jets game against the Senators which starts at 1 pm cst.  Guests:  James Gordon (Ottawa Citizen), Mike Colligan (The Hockey Writers – Pens).

Global Winnipeg:  Fan takes Ladd to the Big Apple.  As we tweeted on Thursday, friend to IC Constantine Gamvrelis aka jetsxoxo, was making more news with his take Andrew Ladd around NYC yesterday.

Winnipeg Free Press:  Jets let game slip away.  The game was in their hands and they didn’t have the killer instinct to finish off the Leafs when they had the opportunity.

Winnipeg Free Press:  Kitty’s paw waves off old times in Winnipeg.  He seemed reluctant during the game to accept the acknowledgement but the MTS Centre crowd of 15,004 cheered him on during a break in the action. 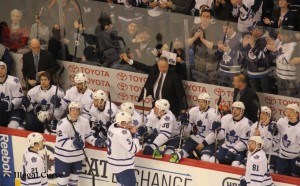 Winnipeg Free Press:  Spotlight on Paul Postma.  Probably not a great day to have the spotlight on him.  He made a critical error during the Jets power play that led to the shorthanded goal by Bozak.

Winnipeg Sun:  Ponikarovsky’s penalty, power plays & more from the Jets-Leafs game.  Terrible penalty to take.  Especially after the team had given up the game tying goal.  While the Jets got off to a decent start they were unable to convert.  Power play was atrocious as the team could not generate any flow.  As well as a few notes from Penton.

Winnipeg Free Press:  Bogosian takes huge step forward.  As do the fortunes of the Winnipeg Jets as soon as he steps back on the ice for this team.

CBC:  Jets face blue line juggle.  While offence from the backend is good as an addition to the forwards putting the puck in the net, that is simply not happening.  For the fifth game in a row the Jets have scored under three goals.

National Post:  Leafs or Jets – Who has the brighter future? After watching last night’s action which team would you prefer to cheer over the next couple of seasons? 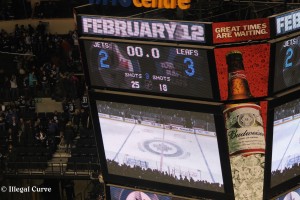