Note: Be sure to stay tuned to @illegalcurve as we will be bringing you all the latest from tonight’s Jets and Panthers game which begins at 6:30 pm cst. During the game you can win IC Gear by participating in our twitter Game Winning Goal contest. Remember that for your vote to qualify you must send in your guess by hashtaging (#) the Game Winning Goal (GWG) contest. (i.e. #ICGWG Wheeler.)

TSN:  Jets continue three game road trip tonight in Florida.  Lots of ways to catch tonight’s action as your Winnipeg Jets have a critical face-off against the Panthers this evening.

Winnipeg Free Press:  Scheifele still riding the pine.  While fans might question the decision making end of the day the Jets want to do what is best for Mark Scheifele.  He is an asset they want to develop properly and you have to believe they are doing what is in his best interest.  Of course what a coach who wants to win in the present and a GM who needs to think more long term believe is the right development path might be two very different things.

Winnipeg Free Press:  Shaking off the rust.  It is interesting to note the difference in conditioning between those players who simply scrimmaged with other NHLers and those that were playing in other professional leagues. 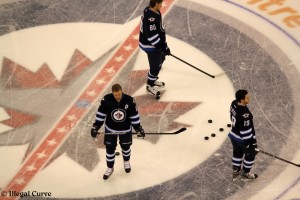 Winnipeg Free Press:  Sin-bin visits down, but Jets still struggling with kill rate.  It is during the special teams play when you most notice the absence of a Zach Bogosian.

Winnipeg Sun:  Finding their own identity.  Fans in Winnipeg are only too happy to watch this team shed the old image they brought from Atlanta and hopefully embrace a new one in which they can adopt coach Noel’s mantra (no word if it is jai-ya).  Along the way there will be relapses but the test will be to see how they learn from the mistakes and avoid making them in the future.

Winnipeg Sun:  Everything sunny for Jets.  While you certainly cannot afford to take any NHL team lightly, the Jets know that the Panthers are not the same team they were last season and you have to take advantage of the fact that they are off to such a poor start.  Especially important to get a clean two points when you consider how essential it is to take as many points from a division rival as possible.

Winnipeg Sun:  Wellwood still shaking his head after going wide on Price.  Sometimes you wish a cerebral player like Wellwood would be a tad more instinctual, but then again, he has gotten to this level of professional hockey by being this type of player. 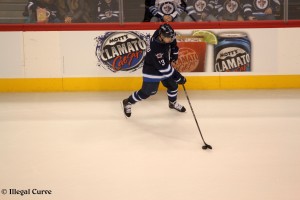 Winnipeg Sun:  Wright Jets back to show after Lightning-fast road to NHL.  It is a tale as old as time, a young prospect rushed to the NHL, gets an opportunity to play in a lot of games early in his career but this tails off and suddenly he is sent to the minors and is unable to get back to the pros.  Wright seems desperate to make the most of this opportunity with the Jets.

IceCaps official site:  The Rock Report.  The Caps’ are just four points back of a playoff spot as the team gets ready to head into action on Friday against the Binghamton Senators.  Hopefully they had a restful All-Star break.  Here is the week in review.

Calgary Herald:  Late goal stuns Hitmen, gives Swift Current 5-4 win.  Adam Lowry continues to dominate in the WHL as he had a big night yesterday with a goal and three assists.  He remains 4th overall in the WHL scoring with 33 goals and 37 assists for 70 points in 51 games.

ESPN:  Coyotes’ sale in question.  Is this the end of the Howl in the desert?  (Seriously, I love the Howl sound when the Coyotes score at Jobing.com Arena).  Things are not looking good in Arizona for Greg Jamison to get the lease deal signed with the city of Glendale.  If this deals falls through (which seems inevitable at this point) the new Mayor and new city council will almost certainly push for a better deal for the city.  While the NHL clearly wants the Coyotes to stay in Glendale how many more ownership groups must fail before they pull the plug?

Globe and Mail:  White-elephant alert to Markham and arena developers.  It is a massive risk to build an arena without assurance that the NHL will eventually become a tenant.  As Eric points out, Gary Bettman doesn’t like being backed into a corner, so these developers need to be wary.

TSN:  Daly refutes Kelly’s comments about NHL expansion plans.  Well we know that whenever the NHL denies a rumour they are always telling the truth.

Former Winnipeg Jets winger Tim Stapleton scored a beauty of a goal in the KHL. It was his 23rd goal in 49 games to go along with 14 assists for the Chicago, Illinois native: