Winnipeg Free Press:  Lingering hangover.  This is not the type of start the Jets wanted their big man to begin the season with.

Winnipeg Sun:  Rookies ready for centre stage.  IC will be down to interview and photograph some of the young guns this weekend as they prepare to make their impressions on the Jets staff.

Winnipeg Free Press:  Prime Minister falls in love with Jets jersey.  Would have to expect that our PM is a big fan of the military themed uni’s.  There is something inherently Canadian to see the leader of our country watching a hockey game in amongst his fellow citizens and it will be nice to see Prime Minister Harper in Winnipeg on the 9th. 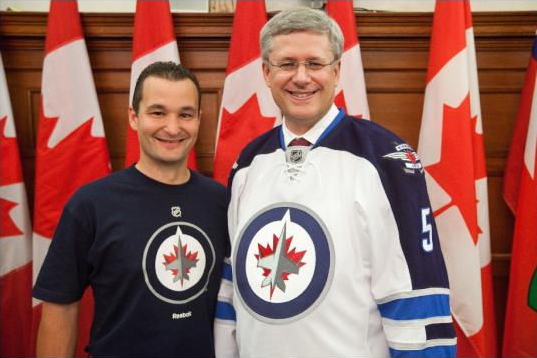 Toronto Star:  Jets stuck on real estate runway in Winnipeg.  Like almost everything that’s been done since the franchise changed hands, it’s been a mad dash to the finish line to try and get everything accomplished that needs to get done, like finding homes for players before the season gets underway.

After the jump Gregoire has point to prove at rookie camp, SI.com asks which is the best Jets uniform and can Wellwood be a great investment?  In ‘Around the NHL’ news Selanne might delay decision, Canes mull visit to Atlanta and Flames prospect aimin for big gig.

Winnipeg Sun:  Wellwood could be great investment.  As has been stated previously, neither side is taking a big gamble and could be decent pay off.

Winnipeg Free Press:  Gregoire has point to prove in B.C.  Kyle, our prospects expert, is quite high on this local Winnipeg product and thinks he can be a nice addition to the team.

SI.com:  Which is the best uniform?  The guys over at SI are conducting a poll to determine the best hockey uniform and these are your four options for the Jets.

OC Register:  Selanne might delay decision until camp.  No Teemu. some of us have already selected the December 17th game against Anaheim and we’d like to know now if you are planning on playing.

News & Observer:  Canes mull visit to Atlanta.  Perhaps it is “too soon” to be picking over the carcass that is the fan base in Atlanta but it appears that there are 2, if not 3 NHL teams that are prepared to duke it out for this fan base.

Calgary Sun:  Flames prospects aimin’ for big gig.  Now is the time for optimism but will it last?