CBA news: Sides to review new CBA proposal by phone. A look at the NHL’s proposal. Sides still have plenty to do. New hope for hockey’s return. NHL, NHLPA playing all of us for rubes. Season-ticket holders stand by their teams.

SI.com:  Winnipeg, Columbus may switch conferences in shortened NHL season.  Looks like the Jets and the team they first played in their return to the NHL migt be making a change.  Would certainly make travel a lot easier.  Bye Bye Eastern Conference?  Perhaps this is why Illegal Curve’s Drew Mindell was in Columbus, Ohio yesterday. 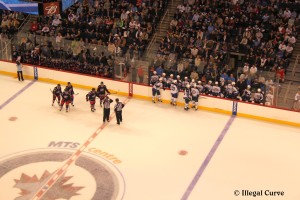 Winnipeg Free Press:  Some fans boycotting NHL gear.  I guess one or two individuals does count as “fans” but I seriously doubt that Jets gear has been impacted.  While sales are not going to be what they were last year, we have already seen that they are very healthy here in Winnipeg.

TSN:  Dumont leads Bulldogs past IceCaps.  It appears the Christmas break wasn’t enough to fix what ails the IceCaps as the team continues to struggle.

The Coloradoan:  Colorado falls short to begin series in Alaska.  Heading to Alaska cooled off the hot December that the Eagles were having.

CBC:  Sides to review new CBA proposal by phone.  While you are listening to the Illegal Curve Hockey show the two sides will be reviewing the details of the NHL’s offer over the phone.

Globe and Mail:  A look at the NHL’s proposal.  Taking a look at the new changes the NHL has made to make this deal more palatable to the NHLPA.

CBC:  Sides still have plenty to do.  If your head hasn’t popped off yet it is sure to in the next week or so as the sides haggle.

Globe and Mail:  New hope for hockey’s return.  Well now we at least have an official end date for this never ending story.

Calgary Herald:  NHL, NHLPA playing all of us for rubes.  The big question is will the NHL/owners and NHLPA do anything to appease fans?

Globe and Mail:  Season-ticket holders stand by their teams.  Is anyone surprised that fans are staying loyal?  100,000 Canadian season ticket holders and 200 canceled tickets, which you know were snapped up in less than no time.