CBA news: Fehr responds to Daly’s comments, waiting on NHL to resume talks. Daly tells HNIC Radio there will be a season. Union wants to restart talks with NHL. Canadian appetite for NHL likely to endure.

World Juniors: Galchenyuk on a roll heading into tournament. Everything you need to know about Canada’s team. Eberle tops TSNs list of Top 40 Canadian WJHC players.

TSN:  Mark Scheifele 1-on-1 (video).  The Jets first pick in 2011 talks about playing with Ryan Nugent-Hopkins and the chemistry they’re building.

Winnipeg Free Press:  Kane’s days are numbered in ‘Peg.  Gary clearly spells out why he believes Kane’s time in Winnipeg is finite.  Some very interesting revelations in this article.

Winnipeg Free Press:  Yin and Yang of Evander Kane.  Detailing his on and off ice activities.  And before this becomes “is Winnipeg really that much of a fishbowl”, remember that there are numerous other players who live in this city, party and do not draw attention to themselves.

Winnipeg Sun:  Winger without a clue.  Paul also doesn’t hold back in what he views as a major misstep by the young Jets winger.

Sportsnet:  Another scorn for the league.  Spector begins with a focus on the Kane tweet and then moves on to various other PR mistakes the players have made during the lockout.

Winnipeg Sun:  KHL was too slow for Kane.  While many expected Kane to dominate in the KHL his numbers were quite disappointing, something he attributes to the difference in game play between the NHL and KHL.

Winnipeg Sun: Kane cash photo stirs emotions (video). In case you missed any of yesterday’s excitement, the Jets young gun tweeted a picture of himself in Vegas (from November) and it had an immediate impact on the world of twitter (how can you tell the NHL is locked out?).  Not surprisingly locals were none too pleased when interviewed about the photo. Now they likely didn’t have the context of his comments to both the Sun and Free Press, but nevertheless, fans let their feelings be heard. 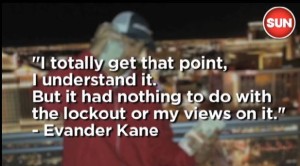 Winnipeg Jets official site:  Dedication to the community (video).  Mick E Moose and the Winnipeg Jets promo team give back to the local community.

TSN:  Schenn scores winner as Phantoms down IceCaps.  After losing 5 straight to start December the Caps had briefly turned things around with a 2 game winning streak.  That came to a halt with a loss to Adirondack last night.

The Coloradoan:  Ulanski powers Eagles to win over Condors.  Despite only having 5 forwards and 8 defencemen, the Eagles pulled off another victory with a depleted roster.

Northern Colorado 5:  Eagles add Steve Haddon.  After losing the 2 top scorers in the ECHL, Colorado went back to the well to add a known quantity in Haddon.

Globe and Mail:  Fehr responds to Daly’s comments, waiting on NHL to resume talks.  Love the suggestion that they go back to the group of owners and players that were negotiating in New York but add in Bettman and Fehr.

CBC:  Daly tells HNIC Radio there will be a season.  Should fans take this to the bank as proof positive that the 2013 season will eventually get underway?  While it is a positive sign no point in getting your hopes up too soon.

ESPN: Union wants to restart talks with NHL.  Of course with the expectation that the players are going to lose out in the current negotiation, the union is doing whatever it can to save face.  This means continuing to play this game of cat and mouse.

Globe and Mail:  Canadian appetite for NHL likely to endure.  Are we really surprised that the desire to watch live NHL hockey in this country remains strong despite the lockout?  The big test for the NHL will be in the markets that were struggling before the lockout began.

Montreal Gazette:  Galchenyuk on a roll heading into tournament.  The Montreal Canadiens prospect has been tearing up the OHL of late and will be a big addition to Team USA in this year’s tournament.

National Post:  Everything you need to know about Canada’s team.  A breakdown of the entire Canadian team.

TSN:  Eberle tops TSNs list of Top 40 Canadian WJHC players.  Whenever you find yourself ahead of the Great One on a Top list of players, you know you’ve accomplished something special.