Jets & Affiliate news: Hainsey anxious to get talks going again. The Jets effect. Good riddance, 2012. Toby’s glad to be back, lockout or no. IceCaps injury list still long but losing streak over for Jets’ farm team. Eagles Week In Review.

TSN:  Hainsey anxious to get talks going again.  Not a big surprise that the players are wanting to get back to the table at this point.

Winnipeg Free Press:  The Jets effect.  Those are some impressive, but unsurprising, numbers showing how business leaders in the province feel about the positive impact the return of the Jets and NHL hockey has had on Manitoba.

Winnipeg Free Press:  Good riddance, 2012.  While the lockout will certainly be a significant memory of 2012, Jets fans have to focus on the positives that were experienced during the first 4 months of the year with the return of NHL hockey to our city.  What were your favourite memories?

Winnipeg Free Press:  Toby’s glad to be back, lockout or no.  Enstrom seems happy to be back in the city although it is clear that he wants to be talking hockey and not lockout.

Globe and Mail:  IceCaps injury list still long but losing streak over for Jets’ farm team.  The team returned Joey Sides to the ECHL affiliate Colorado Eagles yesterday.  They still need to find their scoring touch as this has eluded them all season long.  Doesn’t sound like Burmistrov will be returning to the lineup anytime soon. 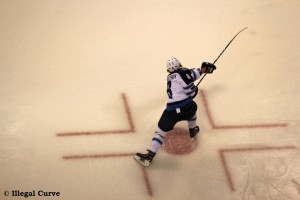 National Post:  Lockout tactics burning hockey.  Cam Cole doesn’t pull any punches in this piece about the damage being done to the game.

Globe and Mail:  Lockout doing ‘alarming’ damage to brand.  Can anyone be surprised by the knowledge that the league and players have done irreparable harm to the game.  Part of the problem is the indifference we are seeing on a daily basis.  People have lives, jobs and can find other hobbies to spend their disposable income on.  Both sides have taken the fans for granted and I will be quite curious to see how they plan on fixing this problem.  Will it be ‘business as per usual’ or will both the NHL and NHLPA make tangible efforts to repair the fracture they have created?

CBC:  Steve Fehr says NHLPA ‘ready to meet’ NHL.  Is this an olive branch?  Nope just more posturing as we get closer and closer to a drop dead date the league claims not to have.

Sportsnet:  NHLPA’s strategy could backfire.  The players position, which some have claimed is not posturing, is clearly just that as illustrated in this excellent article.

CBC:  NHL needs to ‘make whole’ with fans.  Count me as someone who has been advocating this for the entire lockout.  The fans are paying for this and as I indicated above, I will be quite interested to see what is done to acknowledge the sacrifices NHL fans have made during the lockout.

NHL.com:  Canadian team features strong group of Quebecers.  Unfortunately for Manitobans we are underrepresented  (0) on this year’s team.

ESPN:  Miller looks to lead Team USA.  Nice to have someone with some AHL experience on the team.

CBC:  Suspended Senators prospect unavailable for tournament.  Team USA got some bad news yesterday when it was ruled that the 10 game suspension for Noesen he received in the OHL would be upheld by the IIHF.

NHL.com:  NHL Network-US, NHL.com offers live WJC coverage.  For those in the States wondering how they could watch the tournament here is the answer.