Jets & Affiliate news: Antti Miettinen has signed with HPK and is off to Finland. Postma stars in IceCaps overtime win against Sharks. Eagles finish weekend strong.

CBA news: Late-night session to lead to talks early this week. The NHL and its players union have resumed talks. NHL wants players to pay for its mistakes. NHL lockout forces AHL to cut outdoor game.

Helsingin Sanomat:  Antti Miettinen has signed with HPK and is off to Finland.  Using google translate we can see that he is returning to a team he last played for in 2002-03. 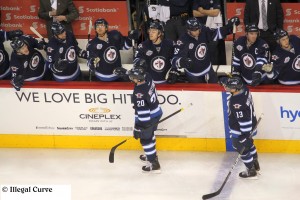 TSN:  Postma stars in IceCaps overtime win against Sharks.  The Caps got the benefit of a goal by Worcester being called off with 64 seconds left in the 3rd period.

Reporter Herald:  Eagles finish weekend strong.  Colorado has climbed out of the basement with a pair of wins this weekend.  Big man Cody Sol got his 1st goal for the Jets ECHL affiliate and Michael Forney had a hat trick.

USA Today:  Late-night session to lead to talks early this week.  Perhaps both sides needed a cooling off period as yesterday Bill Daly and Steve Fehr met for a significant period of time, and appear to be getting somewhere.

Globe and Mail:  The NHL and its players union have resumed talks.  Makes sense.  Waste two weeks not talking, cancel the Winter Classic and then decide to resume talks.

The Province:  NHL wants players to pay for its mistakes.  Yes but if we had less teams perhaps all those players who are currently on an NHL teams 4th line making close to a million dollars would find themselves in the AHL making significantly less.

Sportsnet:  NHL lockout forces AHL to cut outdoor game.  While the AHL has been the beneficiary of the excess NHL players, the lockout still has had some ramifications on the lower league.

USA Today:  Phoenix Coyotes’ Paul Bissonnette gets pranked.  Hilarious prank by Mike Cammalleri.  The line by Bissonnette when asked what team does he play for must have fans in Quebec excited.  The security guard asks “Who do you play for?”  Bissonnette says in response “Phoenix, well maybe Quebec soon”.

Illegal Procedure: Winnipeg Blue Bombers Papers. If you are a fan of CFL football, check out our other site, which gives you all the latest Bombers & CFL news. The Bombers closed out Canad Inns Stadium in style with a big victory over the Montreal Alouettes.  What are your best memories from the stadium?