CBA news: NHL Players’ Association shows no signs of fracture this time around. Players get escrow cheques. NHL could shoot itself in the foot by cancelling Winter Classic. Difficult to care about sports work stoppages. Time to take back our game

CBC:  The package – Mark Scheifele.  Taking a look at some of the prospects on the Canadian clubs across the NHL and Mark Scheifele is up.

Winnipeg Sun:  Time’s right for Wheeler to take flight.  Without much doing, the Minnesota native will jet off to Germany today and start game action on Friday.

theScore:  Winnipeg Jets electrical guitar.  For our more musically inclined readers, check out this electric guitar with some Jets representation. 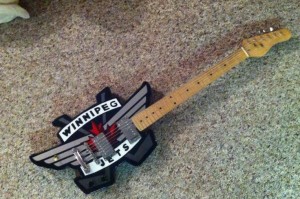 Reporter Herald:  Colorado Eagles’ Trent Daavettila breaks through.  The ECHL veteran was brought in to help with the Eagles scoring and it appears that his early season drought might be over.

National Post:  NHL Players’ Association shows no signs of fracture this time around. If there is dissension in the ranks, it has been muted.

Globe and Mail:  Players get escrow cheques.  Now that the players have staved off the bill collectors for a bit, it seems likely that they will be less inclined to be getting back to the bargaining table.

Globe and Mail:  NHL could shoot itself in the foot by cancelling Winter Classic.  This would be surprising if the NHL hadn’t already shot itself in the head with its current (or lack thereof) bargaining tactics.

Chicago Sun-Times:  Difficult to care about sports work stoppages.  And this from a market like Chicago.  Imagine what is happening in other, less traditional hockey environments.

Montreal Gazette:  Time to take back our game.  Some radical suggestions by Hickey on how the game can be brought back to reality.

Yahoo:  Tyler Bozak joins NHL Halloween blackface club as Michael Jackson.  Seems the twitter universe is all a twitter with outrage over Bozak’s choice of costume.  While it seems apparent that he meant this as a tribute, many viewed the costume as inappropriate.

Illegal Procedure: Winnipeg Blue Bombers Papers. If you are a fan of CFL football, check out our other site, which gives you all the latest Bombers & CFL news.  Brink to start, what would you do if you were the Bombers GM and many other articles as we are mid way thru the Bombers final week of the regular season.