CBA news: What people are saying about latest NHL cancellations. Despite more games being cancelled, there is hope. Cancellation of Winter Classic could be sign of doom for NHL season. Blackhawks stars call NHL’s new cancellations a ‘scare tactic’. NHL may have canceled opening night, but fans take stand.

Note: Tune into the Illegal Curve Hockey Show today from noon to 3 pm as the guys have 3 hours of hockey talk on TSN Radio 1290. Guests: Aaron Portzline (Columbus Dispatch) and John Davidson (President of the Columbus Blue Jackets).

Winnipeg Free Press:  Frustration mounting.  One would hope that rather than sitting on the sidelines, all players are actively engaged in the collective bargaining process.   Perhaps some internal pressure will get Fehr & company moving instead of waiting to see which side blinks first.

Winnipeg Free Press:  Fans the ones getting shafted.  Gary is bang on.  As I’ve been saying since the outset of the lockout the only people who lose in this power play will be the fans.

The Telegram:  Lockout came at a bad time for Gagnon.  A big difference in salary for the BC product.

Jets official site:  Adam Lowry named to WHL Subway series roster.  A healthy Lowry is showing the entire WHL what he is able to do. 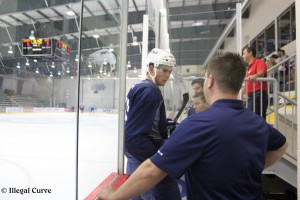 Winnipeg Sun:  Cancelled games disappointing.  Slater is right.  It would be a shame to lose the Winter Classic, especially considering the State of Michigan, his home state, will benefit to the tune of 75 million dollars in revenue if things go off.  Speaking of Slater he is offering up 2 signed hockey sticks for the best Halloween costumes he gets @ tweeted to his twitter account @slaterjim.  So be sure to send him some tweets and if you include @illegalcurve in your tweet, we will throw in some IC Gear as well.

Winnipeg Free Press:  NHL pulls plug on November games.  A number of good Jets games were lost as a result of the decision made by the NHL yesterday.

USA Today:  What people are saying about latest NHL cancellations.  From the NHL to players to fans, these are some of the opinions being expressed in light of recent events.

Globe and Mail:  Despite more games being cancelled, there is hope.  Fans cannot help feeling despair as the NHL cancels games and threaten to cancel the Winter Classic but perhaps it is not yet panic time just yet.

National Post:  Cancellation of Winter Classic could be sign of doom for NHL season.  Seems rather rapid to cancel a month of the season and to quickly follow that up with threats to the Winter Classic.  Is the NHL playing all its card too quickly?

Chicago Sun-Times:  Blackhawks stars call NHL’s new cancellations a ‘scare tactic’.  While the Hawks are not wrong the truth is both sides are playing games.

News and Observer:  NHL may have canceled opening night, but fans take stand.  The reality is once the lockout ends, fans will have short memories and will come flocking back to the NHL banner.  The NHL knows it.  The players know it.  And the fans most certainly know it as well.

Orange County Register:  Boudreau and staff relish chance to share their expertise with youth coaches.  One benefit to the lockout is that youth hockey has gotten greater attention and is benefiting from the influence of professional coaches like Boudreau.

Edmonton Journal:  Katz Group insider hints at Katz’s frustration with Edmonton.  Things continue to deteriorate in the City of Champions.

Illegal Procedure: Winnipeg Blue Bombers Papers. If you are a fan of CFL football, check out our other site, which gives you all the latest Bombers & CFL news. Today is the day the Bombers will know if they still have a chance at the post season.  Also the final game at iconic Ivor Wynne stadium in Hamilton.