Jets news: Locked-out players locked out. Postma returning to AHL while the NHL is in lockout. Our new book looks back at the Jets first 131 days.

Note II:  Be sure to tune into the Illegal Curve Sports show as today we switch up the format slightly in light of the CBA situation.  The guys will talk hockey, football and baseball on TSN Radio 1290 for today’s show from noon to 3 pm.

Winnipeg Free Press:  Locked-out players locked out.  While players might feel that the fans are on their side, as the lockout drags on, that support will diminish.  Fans and even former NHL stars just want to see the situation resolved as quickly as possible.  It is ironic that the Jets were literally locked out.

Winnipeg Free Press:  Postma returning to AHL while the NHL is in lockout.  Fans can hope with a little bit more AHL seasoning they will be seeing Postma celebrating with his Jets teammates this season. 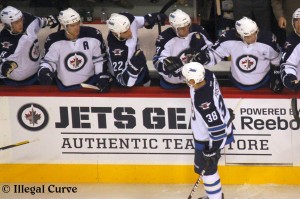 Winnipeg Free Press:  Our new book looks back at the Jets first 131 days.  Randy Turner will be a guest on the show today and will be discussing his newest book.

Edmonton Sun:  ALRB reserves decision on Oilers and Flames appeal.  I wonder where the strength of conviction in the lockout is if you attempt to circumvent the process in this manner?  What does it say for player solidarity?

Detroit News:  NHL could cancel Detroit’s Winter Classic as lockout tactic. If it came to this, then I suspect those of you who answered ‘entire season’ to our Poll question asking how long the lockout might last would be right.  If the NHL loses this prize, you can bet the players would be made to feel some serious financial pain.

Globe and Mail:  Accountant blows whistle on numbers.  Of course the ledger can be manipulated.  It is why when you hear a team loses ’40 million dollars’ you know that this number might not be completely reflective of the true loss.

Toronto Star:  Biggest contracts could take hit under new CBA.  Anytime you can eliminate the ‘wink, wink’ aspect of these decade long contracts is probably a good thing.  Of course I don’t like the idea of retroactively adjusting contracts that were signed in ‘good faith’.

Sportsnet:  Lack of urgency a problem in CBA talks says Mike Modano.  I liked Bobby Orr’s suggestion that the players and owners be locked in a room with bread and water and forced to come to a resolution.  It is a joke that both sides are dragging this out.

ESPN:  Bettman’s position hard to comprehend.  Bettman is basically asking for cost certainty to save the Owners and GMs from themselves and you can understand why the players are fighting this notion.  As Jesse Rogers writes, looking at the Frolik contract should be an indication of what is wrong with the NHL.

Edmonton Sun:  Daly neutral on new Oilers arena deal.  You can bet the NHL wants to see a new building in Edmonton as soon as it can be built.

Edmonton Journal:  Gretzky trade still worst Oilers moment.  As a Jets 1.0 fan you cannot help but read that Top 10 Oilers moments with a grin after all the pain they put Winnipeg fans in during the old Smythe Division days.  Of course their 5 Stanley Cups are a soothing balm for Oilers fans when they are forced to deal with the “hard times”.

Montreal Gazette:  Hockey sticks have come a long way.  Long gone are the days you could buy a wood stick for $10 as now the composite has completely changed the hockey landscape and along with that change is a significant increase in cost.

Illegal Procedure: Winnipeg Blue Bombers Papers. If you are a fan of CFL football, check out our other site, which gives you all the latest Bombers news.  The Bombers win, the Bombers win.  Is this the start of something big or did they simply beat another team from the basement?