Note: The Jets practiced on Wednesday with a bit of a twist in the top six as they ran a top line of Kyle Connor, Mark Scheifele and Pierre-Luc Dubois as head coach Rick Bowness tries out some things during this stretch of the schedule which gives them some practice time. They are off today and will return to the ice on Friday for practice before they head to Calgary to start a two-game road trip.

Note II: The Moose were off on Wednesday but will hit the ice for practice today as they get set to face the Wranglers of Calgary for the first time ever on Friday.

Note III: Make it 12 in a row for the Ice as they sweep their two-game series with the Rebels with last night’s 7-4 win at home. Winnipeg improves to 17-1-0-0 on the season and they sit 1st in the East. Goalie Daniel Hauser is an impressive 13-0-0-0 on the season. They will take on the Wheat Kings on Saturday as their ten game homestand continues.

Winnipeg Sun: The knuckles of Jets’ Brenden Dillon helped set the tone against Stars. It was quite a spirited tilt between Dillon and Dellandrea which really energized the crowd. 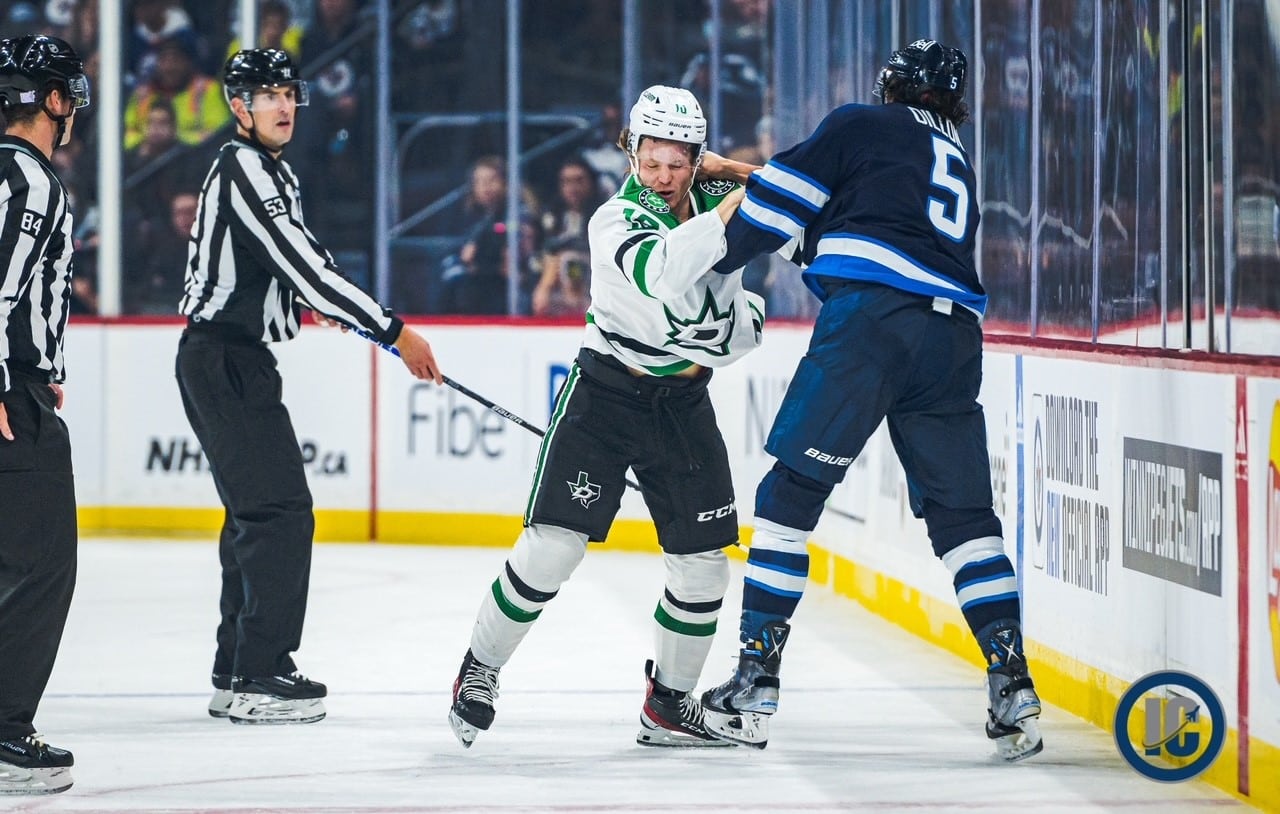 Winnipeg Sun: ‘Playing for each other’: Jets’ hot start has strong underpinnings. It is interesting to hear that they are a closer bunch given that it is largely the same group but whatever the secret to that success is this group is off to the best start in franchise history.

Winnipeg Free Press: Early-season success has Jets believing. No reason not to believe because even though it is early in the season and even though they’ve shown some overreliance on Connor Hellebuyck, they’ve also been able to show that they can put forth consistent, 60-minute games.

Winnipeg Free Press: Jets say dropping the gloves can play a critical role in on-ice success. (Paywall). The truth is fighting is down, enforcers who play just a few minutes in a game are few and far between and the ability to police things on the ice does seem to keep most players honest.

Portage Online: Jets Alumni crash land in Portage. It was great to see Dennis in the pressbox the other night and great to see him included as part of the alumni who are connecting to Manitobans across the province.

Global News: Is stellar start to season for first-place Jets sustainable? Already 15% of the season has been concluded so as Paul suggests in his latest piece there is still plenty of road ahead but this team seems to be on the right path to ensure success this season.

The Athletic Winnipeg: Mark Scheifele, Rick Bowness and trust: How the Winnipeg Jets took first in the Central. (Paywall). Just a game or two of difference and it is hard to draw any conclusions but 12 games into the 2022-23 campaign seems to suggest that 55 is back and the impact of the new bench boss is very real.

Sportsnet: Hellebuyck continues to shine for Jets in bounce-back season. Ken Wiebe joins The Jeff Marek Show to discuss Winnipeg Jets goaltender Connor Hellebuyck’s great start to the 2022-23 season, saying the 29-year-old was “dialled in” during the off-season and he’s been “dynamite” to begin the new campaign.

Winnipeg Free Press: Ice power past Rebels to complete sweep. (Paywall). If you want insight into the local WHL club then check out Mike’s column.

Red Deer Advocate: Penalties sink Rebels in second straight loss. Get insight into the game from an outlet that covers the Ice opponent.