Note: The day started off on a positive for the Jets as they got the news that Dominc Toninato would be adding more depth to the Moose as he cleared waivers. However, that positivity didn’t last long as the team PR account tweeted out some breaking news about Jets bench boss Rick Bowness who the team indicated has covid and wouldn’t be behind the bench for the home opener. Instead it was associate coach Scott Arniel. When they eventually hit the ice for their home opener they blew open a close game to win game 1 by a final score of 4-1 over the Rangers. Today they are scheduled to practice at 12 noon out at the IcePlex so stay tuned for the Practice Report.

Note II: The Moose will kick off the regular season welcoming the IceHogs to Winnipeg for their home opener which gets underway at 2 PM CDT. As always be sure you’re following along as I will be covering the game.

Note III: The Ice are continuing their road trip tonight in British Columbia where they will take on the Cougars in Prince George. Puck drop is at 4 PM CDT.

Note IV: First college goal alert for Jets 2022 1st rounder Rutger McGroarty. In addition to the goal he also had two assists for his first multi point game as the Wolverines cruised to a 9-1 win. He is up to: 1G 4A in 3GP.  See the goal here.

Note V:  If you’re looking for a few hours of Jets talk then you best be part of the conversation on the Illegal Curve Hockey Show which gets underway at 9 AM CDT. This season you’ll have a chance to win great schwag including authentic Jets jerseys, hats, etc after every single game (For a variety of ways to enter click here).

Sportsnet: Hellebuyck turns in vintage performance in Jets’ season-opening win against Rangers. While Blake Wheeler, Pierre-Luc Dubois and Mark Scheifele were all expected to be scrutinized for what happened this summer it was Connor Hellebuyck who all eyes were on to see how he’d look in the regular season and while it was just one game he looked pretty, pretty, pretty good.

Winnipeg Sun: Jets start season with convincing win over Rangers. While they may have been playing three games in four days this was still a very good New York squad. Was interesting to see the club roll four lines and the 4th line justified that reward with the game-winning goal. 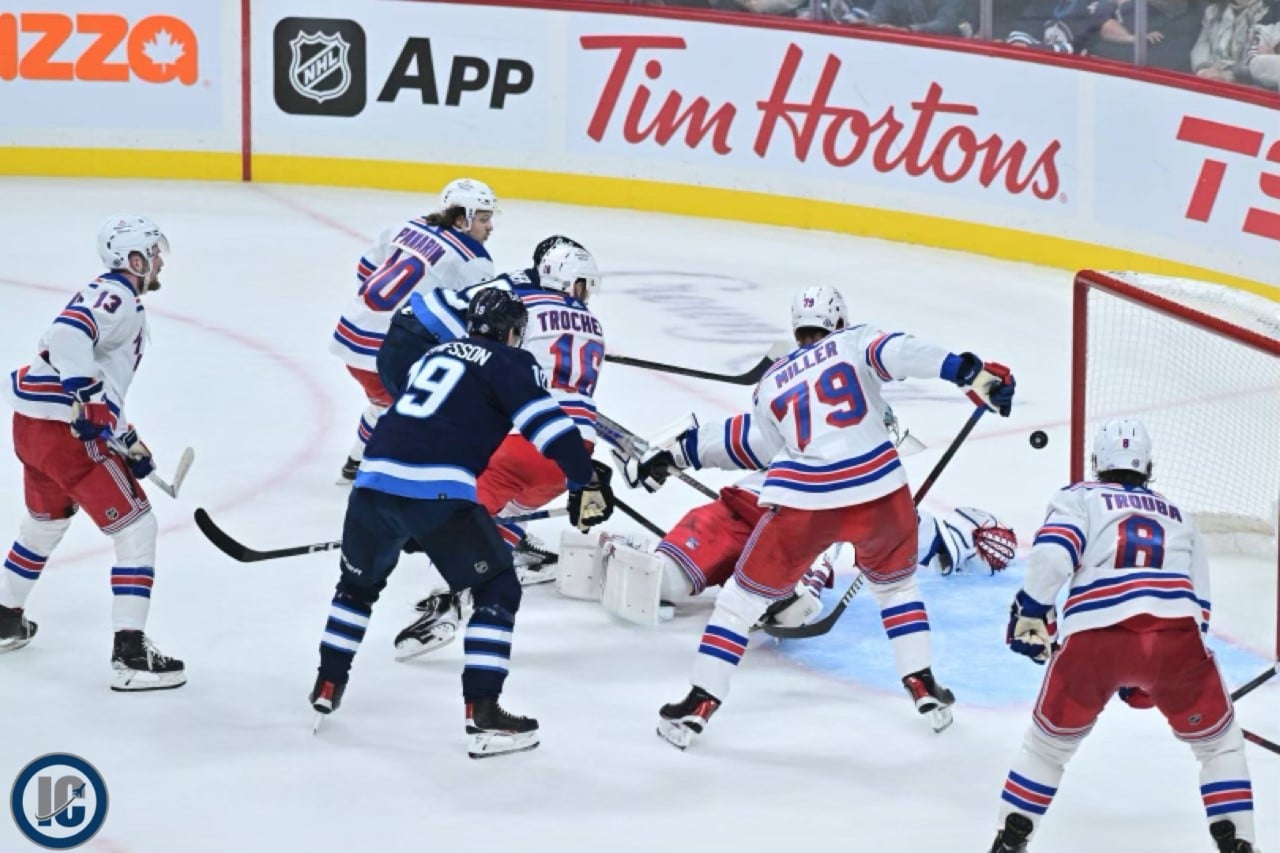 Winnipeg Sun: Wheeler’s ‘C’ casts shadow as Jets open new season. Maybe I am cuckoo for cocoa puffs but I really don’t think there is much left to talk about when it comes to Blake Wheeler and the captaincy.

Winnipeg Free Press: Jets get total team effort as Scheifele nets pair in season-opening victory. (Paywall). Using all four lines was a difference and Connor Hellebuyck playing other worldly, which is a return to standard.

Winnipeg Free Press: Lowry a Grade A leader. (Paywall). And depending on the long-term commitment of Mark Scheifele it could easily be us talking about Lowry wearing a ‘C’ not an ‘A’ on his jersey soon enough.

New York Post: Rangers suffer first loss of season after falling late to Jets. Gain insight into the perspective of the game from a writer who covers the Jets opponent.

Global News: Scheifele scores twice, Hellebuyck brilliant as Jets beat Rangers in season-opening win. A motivated number 55 is gonna be a problem for the opposition.

TSN: Can Hellebuyck get back to his Vezina form? Craig Button joined SportsCentre to discuss how Nikolaj Ehlers looked on the top line in Winnipeg’s 4-1 victory over the New York Rangers and if Connor Hellebuyck can return to his Vezina level play this season, after a promising game against a tough Rangers team, stopping 40 of the 41 shots he faced.

TSN: Under Pressure: Mark Scheifele. The Winnipeg Jets haven’t met expectations in recent years, failing to live up to the potential of a talented roster. At the centre of that talent is Mark Scheifele, who despite being a point-per-game player, has failed to help his team get over the hump. Jamie McLennan has more on why he’s got the microscope on Scheifele this season to deliver for his club.