Note: The Jets picked up another big win last night as they defeated the Leafs 6-3 in the game which began with a celebration of Blake Wheeler playing in game number 1000 (biggest cheers may have been reserved for Dustin Byfuglien).  They have now left the stench of their 1-5-1 streak behind and replaced it with wins in three of their last four games which has put them into 2nd place in the Central. Amazing what a week can do. No clear indication before the Papers were published if the team will practice today or take the day off. If they do then stay tuned for a Practice Report. If not, then they will be back on the ice for sure tomorrow as they take on the Hurricanes to conclude this four-game homestand.

Note II: The Moose continue to roll as they defeated the Senators 2-0 yesterday in Belleville which was their fourth straight win and seventh win in their last eight games. Jets goalie prospect Arvid Holm (2017 6th) picked up his first career AHL shutout and had run support courtesy of defenceman Declan Chisholm (Jets 2018 5th), who scored his fifth goal in the last six games and Todd Burggess who scored his first ever AHL goal. Manitoba are off today and will return to the ice tomorrow for a practice as they get set to face Laval on Wednesday to conclude the three-game road trip.

Note III: Some news today as the Jets have placed Riley Nash on waivers and Neal Pionk had a phone hearing with Player Safety which resulted in a two-game suspension.

Sportsnet: Jets offence hitting stride after intense win over Maple Leafs. Couldn’t happen at a better time for the Jets as they were doing it all but getting run support.

The Athletic Winnipeg: Blake Wheeler’s 1,000th game puts the spotlight on the people who make him what he is. (Paywall). You saw it in the video the Jets released which reflected the love/support he received from his family and teammates. Murat writes about the story that dominated the news ahead of last night’s game.

Winnipeg Sun: Jets defeat Leafs in chippy, fist-filled affair. Who woulda thunk it that vestiges’ of the hate manufactured during the days of the All-Canadian Divison would continue to manifest itself into this season where these two teams only play twice. Scott has more on what he saw from the game between Winnipeg and Toronto.

Winnipeg Sun: Stastny happy to be the one celebrating someone else’s 1,000th game. Fitting that the two silver stickers are such close friends and could celebrate the other’s sucess.

Winnipeg Free Press: Defence be damned. (Paywall). While the first period score would seem to run counter to the headline there were good chances for both teams but the goalies were making the stops. The middle frame turned out to be the wild, wild west for the goalies and the defence. Jay recaps the action. 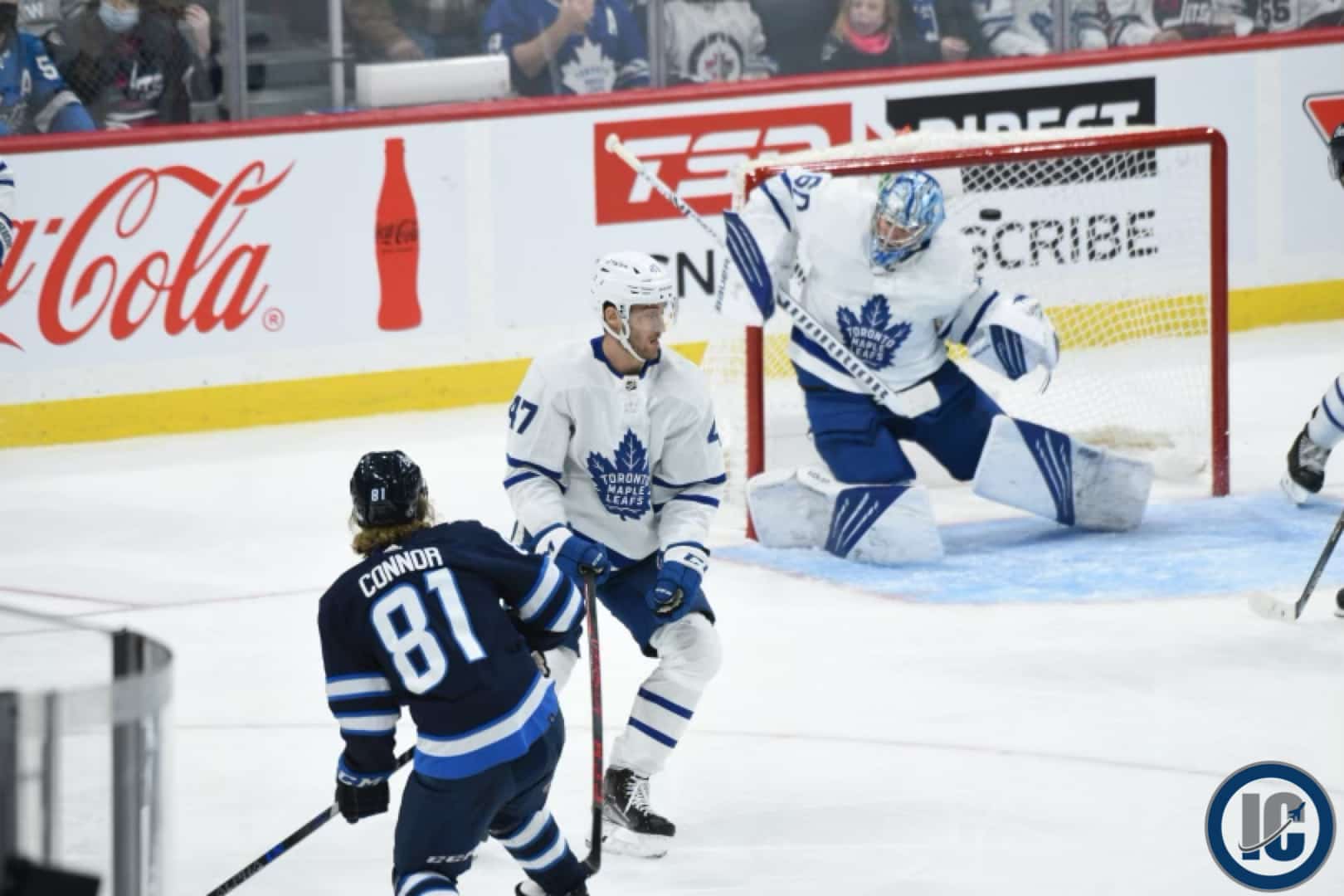 Winnipeg Free Press: Great night for captain Wheeler. From the video presentation, to the gifts, to the reaction from his teammates and fans it was a night to remember for the Jets captain although I’m sure he was most pleased that his team was able to pick up a critical two points.

Toronto Star: The Leafs go down swinging in a painful loss to the Jets. Read about the game from the perspective of a writer that covers the Jets opponent.

Toronto Sun: Travel-weary Leafs lose bitter battle to Jets. You’d think if travel weariness was such a concern the NHLPA could have lobbied harder for the baseball style schedule that the AHL employs and that was used last year with quite a bit of success.

The Hockey News: Maple Leafs navigate tricky balance of sending message in loss to Jets. Considering these two teams don’t play for more than three months I am not sure that message is gonna carry over. Perhaps it was a message to the rest of the NHL.

TSN: Maple Leafs can’t find the energy, Jets’ offence steals the show once again. The Maple Leafs dropped their second consecutive road game and it was clear that they did not have the energy to keep up with a revitalized Jets’ offence. The TSN Hockey panel discuss Toronto’s flat performance, the extra effort Winnipeg seemed to play with and the hits that may get the attention of the Department of Player Safety.

Sportsnet: Maurice says energy and emotion from Jets-Maple Leafs game was good. Paul Maurice spoke about the rivalry that seems to be heating up between the Winnipeg Jets and Toronto Maple Leafs.

Illegal Curve:  Saturday morning show. Recap of the Jets 8-4 win over the Devils. Previewing the Jets and Leafs game. Cole Perfetti being named to the Team Canada selection camp, benefit of going to World Juniors. Includes a chat with Mike McIntyre of the Winnipeg Free Press and Jeff O’Neill (TSN Overdrive).