Jets news: Slater named an assistant captain for Team USA. Plays of the Year – Round 1, Match-up 11. Interest in Pascal Vincent in Montreal?

Stanley Cup news: Jagr sticks with his faith. Travis Zajac’s season almost ended early but now he is Devils leading scorer. Elliot is the key for Blues in series. After down season, things are looking up for Dustin Penner.

Jets official site:  Plays of the Year – Round 1, Match-up 11.  Antro vs. Thorburn and both plays against the Sabres.  Antro has some nice foot to stick action but have to give the edge to Thorburn’s slick moves around the D and Ryan Miller.  Here is Chris talking about his slick goal from that night, including when we told him he was trending on twitter and his response to that.

Ottawa Sun:  Bergevin has plenty of work to do.  Looks like the Jets assistant coach could be getting a phone call about the coaching vacancy in Montreal. 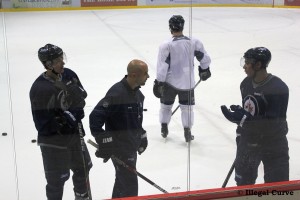 The AHL.com:  AHL action on SiriusXM this weekend.  Tune into the action on Saturday as you can listen to your IceCaps on satellite radio.

The Telegram:  Opportunity wasted.  Before planning their strategy for Norfolk in a clash to titans Eastern Conference Finals, the Caps do have to figure out a way how they can get past a pretty solid Penguins team which finished the regular season with 1 less point than St. John’s.

The Telegram:  Penguins defeat IceCaps 3-1.  The IceCaps played the exact opposite of how they played in Game 1 and the result was a loss to the Penguins.  Now they head to Pennsylvania tied 1-1 with Game 3 going Saturday.  Interesting note:  The 50/50 payout was $20,400.00.

Scranton Times-Tribune:  Baby Pens even series.  They break down last night’s game by the numbers.

Philadelphia Daily Inquirer:  Jagr sticks with his faith.  A really in-depth article on the extremely talented Jagr, which provides readers a bit more insight into the man.

Star-Ledger:  Travis Zajac’s season almost ended early but now he is Devils leading scorer.  The Winnipeg native suffered through some disappointment this season in his recovery from an Achilles injury, including missing both Devils games at the MTS Centre.  He hasn’t disappointed in his return though, leading the Devils in the post-season.

St. Louis Post-Dispatch:  Elliot is the key for Blues in series.  The ability to rely on a goalie tandem is handcuffed with Halak out for the 2nd Round.  This meas that St. Louis is going to have to ride Brian Elliot, as they will likely not go to Jake Allen who has yet to start an NHL game.

L.A. Times:  After down season, things are looking up for Dustin Penner.  The Winkler, Manitoba product is producing at levels that are more in keeping with his talent level.  Can he maintain this pace?

Illegal Curve:  Stanley Cup Nightly Recap.  If you missed anything from last night’s action, we have you covered.