Note:  Prior to puck drop on Tuesday there was a health update from bench boss Paul Maurice updates on Mathieu Perreault, Adam Lowry and Mark Letestu which you can read about here.  When action got underway at Bell MTS Place between the Jets and Sabres the home side built a 3-0 lead and held on for the 3-1 win which moved them back into a playoff spot.  The Jets were scheduled to practice but have cancelled it.  They will be back on the ice on Thursday as they get ready to host Vegas on Friday.

Note II:  The Moose will have another day of practice today out at the IcePlex as they continue to get ready to face the Wild this weekend in Winnipeg to conclude their four-game homestand.

The Athletic Winnipeg: How Kyle Connor has become an elite goal scorer with the Jets. (Paywall).  Feels like the kid has been an elite goal scorer all his life although he will probably hit 40+ this season and could get to 50 next so he is clearly improving in that realm each year he plays.

Winnipeg Sun:  Connor leads the way as Jets cruise past Sabres.  He hit a new career high for goals (35) last night and did it in 14 fewer games than 34 took him last season.  Scott recaps the action from Bell MTS Place. 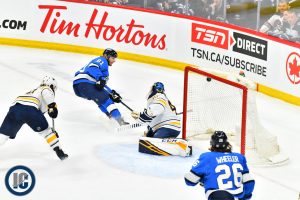 Winnipeg Sun:  Training wheels off for Letestu after health scare.  While the road back to an NHL game is a long one it sounds like just being able to get back onto the ice is a huge weight off his shoulders.

Winnipeg Free Press:  Red-hot Connor at the next level.  (Paywall).  The NHL is starting to look like the NCAA with how prolifically the Michgan born Connor seems to be scoring goals.

Winnipeg Free Press:  Letestu happy to be back on the ice.  (Paywall).  Cannot imagine how tough it must be to feel healthy but forced to wait things out as your body slowly gets better.  It will be interesting what happens with him this season although it still sounds like he is aways away.

Buffalo News:  Travels lead to more travails as Sabres get grounded by Jets to finish trip 0-4.  Read all about last night’s game from the perspective of a writer that covers the Jets opposition.

Sportsnet: With Scheifele, Wheeler reunited Jets’ scoring depth a growing concern. Maybe it is time to reunify the Class of 2015 line!

TSN:  Connor steals the show for the Jets; DeMelo fits nicely with Morrissey.  With two goals and an assist, giving him 35 goals on the year, and a shorthanded assist, Kyle Connor was a factor at both ends of the ice and he stole the show in the Jets win over the Sabres. Dennis Beyak and Kevin Sawyer break down what they saw in the game.

TSN: Cheveldayoff on how the NHL is relaying information amid COVID-19 virus issue. In wake of the COVID-19 virus and the ongoing efforts to contain it and protect the general public, the NHL is doing what it can to ensure that none of its employees and those connected with any of its teams are put in any unnecessary danger. Jets GM Kevin Cheveldayoff spoke about what the general managers have heard from the league.

TSN: Cheveldayoff on EBUG protocol: ‘It’s worked and we’ll continue to leave it in place’. Jets GM Kevin Cheveldayoff witnessed his team on the wrong end of an emergency goalie backup situation against the Blackhawks in 2018 when Scott Foster stepped in to help Chicago to a 6-2 win over Winnipeg. Despite that, Cheveldayoff believes the protocol in place works and it’s not something that will be changed right now.

Winnipeg Sun:  Jets AHL goalie coach gets second chance.  A great story and a great result for a fantastic person and family.