Note:  The Jets left Ottawa last night with two points after they picked up a big 5-1 win over the Senators and today they are in Philadelphia as they get set to kick off a pair of back-to-back matinees starting with the Flyers tomorrow afternoon.  Today they are scheduled to practice at 12 noon CST so be sure to check back for our Practice Report for the latest news and audio.

Note II:  The Moose will look to build on their shootout win from Wednesday as they continue their road trip with a re-match in Laval tonight.  Puck drop is at 6:30 PM CST.

Note III:  The trade deadline is fast approaching on Monday, February 24th at 3 PM ET.  On the latest Insider Trading hockey insider Darren Dreger said the Jets were one of four teams who have expressed interest in Senators centre Vladislav Namestnikov.

Sportsnet: 2020 Winnipeg Jets Trade Deadline Primer.  A look at the needs, pending free agents (both RFAs and UFAs), potential assets to move and a “I don’t think Winnipeg should…”.

Winnipeg Sun: Scheifele hat trick leads Jets past Senators.  What slump?  Mark Scheifele broke out of his in a big way last night in Ottawa.  Scott brings you his insight from the arena. 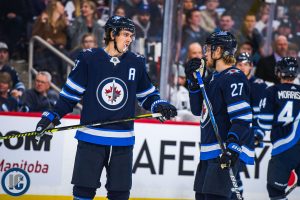 Ottawa Sun: Jets power their way past Senators.  Read about the game from the perspective of a writer that covers the Jets opposition.

TSN:  Button not betting against Jets to make the playoffs. After Mark Scheifele netted a hat trick against the Senators to end a 12-game goalless drought, Craig Button explains why he believes they still have a shot at making the playoffs.

TSN 1200 Ottawa:  Morning Show.  Winnipeg Jets GM Kevin Cheveldayoff on Dylan DeMelo trade, what the team saw in him, how he and Pierre Dorion settled on a 3rd round pick, the development of Patrik Laine and Connor Hellebuyck, importance of player development, how it’s helped them survive injuries to key players, Dustin Byfuglien’s status, how this deadline could compare to his approach in years past, focusing on the here and now, maintaining poise in frantic times such as the deadline, and handling expiring rookie contracts.