Note:  The Jets cancelled their scheduled practice in Winnipeg on Wednesday but the team was still making news thanks to a late night report from Frank Seravalli of TSN who indicated that the Jets are exploring all trade options regarding Dustin Byfuglien.  Today the team will pick up newest teammate Dylan DeMelo whom they acquired on Tuesday as they take on his now former team in Ottawa tonight.  Morning skate gets underway at 10:30 AM CST so be sure to check back for the pre-game report.  Puck drop is at 6:30 pm CST.

Note II:  The Moose kicked off a three-game road trip last night in Laval and after they blew a 2-0 lead fought their way back from 3-2 and 4-3 deficits to force the game to a shootout which they won thanks to a Seth Griffith goal and a Mikhail Berdin pokecheck.  It was also significant because 2018 2nd rounder David Gustafsson scored his first AHL goal.

The Athletic Winnipeg:  The Winnipeg Jets and their deadline day not-so-hidden weapon — cap space.  (Paywall).  Murat looks at the possibility the Jets take on some bad contracts, a rare spot for this hockey club to be in of late.

Winnipeg Sun: Four possible fits for Winnipeg, and one bold idea.  Scott makes some reasonable suggestions but make sure you stay tuned until the end.  And you may want to be sitting down when you read it.

Winnipeg Sun:  Beers, bonding and Scheifele’s hockey hot stove.  While I am not super interested in the details of the first story the second part of Paul’s piece looks on the Jets mantra and the insight provided by the captain. 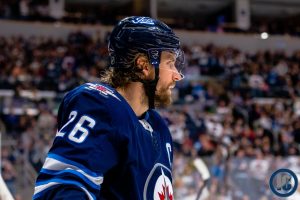 Winnipeg Free Press:  Jets newly acquired defenceman will be welcomed with open arms.  (Paywall).  Based on the things being said and written about him in Ottawa it would appear that the Jets got themselves a nice addition without the high price tag.

Winnipeg Free Press:  Wheeler making it happen.  (Paywall).  A good read by Mike on the things being done by number 26 to ensure team success.

Sportsnet: Cheveldayoff hopes to be ‘a little bit active’ at trade deadline.  The next few days are certainly going to be interesting although I don’t know how exciting Monday will actually be as it may all be done by that time.

TSN:  Jets exhausting all Byfuglien trade options.  The Jets are waiting to pull the trigger on a mutual contract termination with Dustin Byfuglien because multiple sources say the Jets are attempting to exhaust all trade options for the defenceman before the Trade Deadline.