Note:  The Jets depth took another hit on Monday as the team announced following practice in Raleigh that Adam Lowry would be out at least a month after the blindside hit he took in Sunday’s loss to the Hawks.  As a result the team also announced they had recalled 2017 1st rounder Kristian Vesalainen from the Moose.  Today the focus will be on turning things around in North Carolina as they get ready to take on the Hurricanes.  Be sure to check out the pre-game report for the latest news and audio.  Puck drop at 6 pm.

Note II:  After a day off on Monday the Moose will be back in business with a practice today here in Winnipeg.  While they will be feeling good after a big 5-1 win on Sunday they will need to be ready for a weekend series in Iowa against a Wild team sitting 2nd in the Central Division and 13 points ahead of Manitoba in the standings.

Winnipeg Sun: Reeling Jets desperate to get wins before extended break.  It may be a smidge early to be calling these games must win but it is quickly approaching that point.

Winnipeg Sun: Getting chance to share in sons’ hockey lives unforgettable experience for Jets’ moms.  Common theme from the moms was the anything but common refrain to being treated like royalty by the team.

Winnipeg Free Press: With Lowry out, Copp gets another chance to ‘build some chemistry’. (Paywall).  Time for the Swiss Army Knife known as Andrew Copp to show off that versatility. 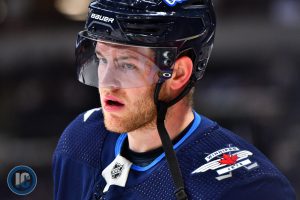 Winnipeg Free Press:  Jets make lifetime memories with a mother of a road trip.  (Paywall).  I like that it wasn’t just the players who were able to bring their moms along for the ride.

Winnipeg Free Press: Chevy better be arranging a transfusion, because the Jets are bleeding out. (Paywall).  It is an interesting situation for the GM as he cannot continue to sell the players or the fans on the notion of “what’s to come”.  I cannot believe that either is prepared to wait another two or three years for a shot.

The Hockey News: The Jets’ defensive deficiencies are threatening to sink their entire season.  To call the Jets D patchwork would be a compliment.  As Murat Ates of The Athletic Winnipeg said on our show this past weekend some players are being asked to play a rung or two above what they have traditionally been asked to do by their respective team.