Note:  The Jets will be hoping to forget their entire Friday evening which saw them get demolished by the Lightning 7-1 in front of a less than pleased crowd inside Bell MTS Place.  Today they are scheduled to practice out at the IcePlex at 12 noon before they leave for Chicago to kick off three games on the road.  Stay tuned for the Practice Report for the latest news and audio.

Note II:  The Moose won their last game on Wednesday night but lost one of their top defencemen as the Jets recalled Cam Schilling.  After splitting the last series against Belleville it will be another tough Canadian matchup for Manitoba as they take on a very good Laval team in a pair of matinees this weekend.  Puck drop this afternoon gets underway at 2 pm.  I’ll be joining Daniel Fink on the broadcast to provide some colour which you can hear on TSN 1290 Winnipeg starting at 1:45 pm.

Note III:  Tune in for three hours of Winnipeg Jets, Manitoba Moose and NHL hockey talk starting at 9 am on the Illegal Curve Hockey Show on TSN 1290 Winnipeg.

Winnipeg Sun:  Lightning embarrass Jets in lopsided loss.  Not exactly the way to play your final home game for almost two weeks.  Perhaps this team and their home fans could use a bit of a break from each other.  Because the effort that was on display last night wasn’t one that made the home crowd very pleased. 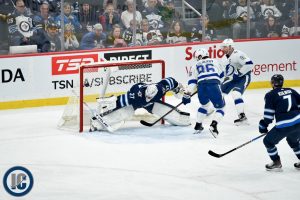 Winnipeg Sun:  Jets broadcaster to explain controversial comments.  Silence in the face of this type of situation is never the right method to handle something of this nature.

Winnipeg Free Press:  Lethargic Jets lose a laugher to Lightning 7-1.  (Paywall).  Nobody was laughing in that Jets room on Friday night after they had it handed to them in their home barn.

Winnipeg Free Press:  Jets need a lot more from Morrissey to keep playoff hopes alive.  (Paywall).  He has a big burden on his shoulders this season, one he was traditionally able to share with Jacob Trouba.

Winnipeg Free Press: Blue-liner Bitetto’s goal is not scoring goals, but still... (Paywall).  You certainly get the sense that he truly does appreciate the opportunity to play in the NHL.

Sportsnet:  Is Patrik Laine becoming a playmaker?  While most would acknowledge this to be the case this season it is surprising when you see just how big an improvement Laine has made in some areas regarding that aspect of his game.

Sportsnet:  Why Connor Hellebuyck is Winnipeg’s X-Factor in push for playoff spot.  In my books he has been the X, Y and Z factors.

The Athletic Winnipeg: ‘I came out of the womb yelling’: Jets defenceman Anthony Bitetto has always had a personality. (Paywall).  No surprise the veteran defenceman has become a favourite among his teammates.

The Athletic Winnipeg: As the NHL’s coaching carousel spins, what would it take for the Jets to move on from Paul Maurice? (Paywall).   Interesting perspective from Murat on a hot button topic here in ‘Peg City.

TSN: Jets ‘feed the beast’ that is the Lightning.  A debacle would put it lightly to sum up the Jets game against the Lightning. Craig Button joins SportsCentre to explain why Winnipeg did a great job of ‘feeding the beast’ with turnovers and other mistakes in a game they’ll want to forget.

TSN:  Did Perreault save face with subdued comments following postgame rant? Mathieu Perreault was heated after no suspension was handed to Jake Virtanen for the elbow he threw on the Jets forward. That’s Hockey weighs in with how the whole situation was handled from all sides.