Note: The Jets and Montreal Canadiens did battle last night at Bell MTS Place which resulted in a 6-2 beat down of the home squad.  The Jets are now on vacation until Friday when they will be back in the city to host the defending Stanley Cup Champion St. Louis Blues that evening.

Note II:  The Moose are off until Friday.  If you’d like the latest health update from Head Coach Pascal Vincent we’ve got you covered here.

The Athletic Winnipeg:  Winnipeg’s 6-2 loss to Montreal was a comedy of errors, but that’s no reason we shouldn’t enjoy ourselves.  (Paywall).  Murat dissects the six goals against the Jets last night.

Winnipeg Sun:  Jets in the giving mood in loss to Canadiens.  Scott Billeck puts his thoughts down after last night’s contest.

Winnipeg Free Press:  Jets give fans lump of coal in 6-2 loss to Canadiens.  (Paywall).  It definitely wasn’t a game to remember if you are a Jets fan.  Mike McIntyre recaps the action. 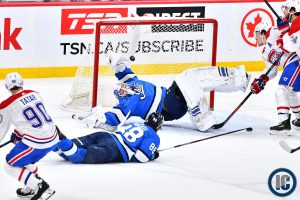 Montreal Gazette:  Canadiens finish Western Canada trip with 6-2 win over Jets.  Read about the game from the perspective of a writer that covers the Habs.

TSN: Habs pepper Jets with six-goals on 48-shots. The Canadiens scored six goals on 48 shots and the top players for the Canadiens stepped up after a slow 10-minutes to start the game. Pierre LeBrun joins Glenn Schiiler to discuss the Habs convincing win over the Jets.

Ground Control Podcast: A chat with Blake Wheeler.  In the 59th episode of Ground Control the guys unwrap a whole bunch of gifts for the listeners. They talk about the big win in Minnesota, Blake Wheeler setting the franchise points record and more. Plus hear from Blake Wheeler, Jansen Harkins and former Jet Ben Chiarot in this jam packed episode.