Note:  The Jets have hit a bit of a slump having dropped two games in a row including last night when they lost 4-1 to the visiting Blackhawks which concluded the three-game homestand.  They are scheduled to practice here in Winnipeg today at 12 noon at the IcePlex before they leave for St. Paul where they will play the Wild in a one-game road trip.  Stay tuned for the Practice Report which will have all the latest news and audio.

Note II:  The Moose spent Thursday returning from a less than successful five-game road trip which saw them go just 1-4-0-0.  Today the team is scheduled to practice at the IcePlex as they get ready to kick off six straight games at home starting tomorrow night against the Rampage.

Note III:  Big news of the day on Thursday was that the Jets claimed Eric Comrie off waivers.  It has been a roller-coaster season (to put it mildly) for the Jets 2013 2nd round pick.

The Athletic Winnipeg: Jets forced to show their resolve again as they search for ways to keep recent skid from snowballing. (Paywall).  Ken examines the last few games from the Jets perspective and highlights at least one area that is going to require some drastic improvement (spoiler alert: PK).

Winnipeg Sun:  Lehner stands tall in net as Blackhawks beat Jets.  The Chicago netminder was sensational last night and I’m sure Kyle Connor was trying to do some voodoo during the intermission because 81 for the Jets couldn’t buy a goal against Lehner despite numerous grade A chances. 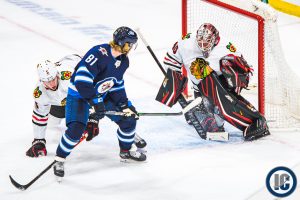 Chicago Tribune:  Kane’s 4-point night leads the Hawks to victory over the Jets, but Saad leaves with injury.  Read about the contest from a writer that covers the Jets opposition.

Winnipeg Free Press:  Lehner backstops Blackhawks to 4-1 win over Jets.  (Paywall).  Between Lehner’s efforts in the net and Patrick Kane it was quite a game from a Chicago team that is now 7-1-0 in the second game of a back-to-back.

Winnipeg Free Press:  Due to injuries, Jets’ third line a work in progress.  (Paywall).  This Jets won’t have a long time to try to get this figured out as they won’t be able to run the top two lines and hope that will be sufficient to produce the goals necessary to win hockey games.

Winnipeg Free Press:  Jansen Harkins’ first NHL call-up brings tears to a proud dad’s eyes.  (Paywall).  He has worked extremely hard to get to where he is at this point in his career.  Jay wrote a great article about his journey.

The Athletic Winnipeg:  What is ‘second quick’? A simple yet foundational part of Winnipeg’s defensive structure.  (Paywall).  Murat with an interesting article which has Andrew Copp putting on his teaching cap for this one.

TSN:  Lehner and Kane steal the show in Winnipeg.  Robin Lehner made 36 saves to stymie the Jets, while Patrick Kane continued to perform at a high level, putting up four points against the Jets. TSN Hockey analyst Dave Poulin has more.