Note:  It was a busy Monday here in Winnipeg which saw the Jets practice as they got ready for their next game on this three-game home stand.  Following practice coach Maurice indicated that Mathieu Perreault was in concussion protocol and he also spent quite a bit of time talking about his love for living in the city of Winnipeg and coaching the Jets in response to a question about his name being connected to the coaching opportunity with the new NHL franchise in Seattle.  Today the Jets turn their attention to the Hurricanes with a 10:30 AM morning skate.  There wasn’t word as to whether the Jets had made a recall from the Moose so you can likely expect Joona Luoto to return to the lineup.  Be sure to check back for the pre-game report which will have the latest news and audio from Bell MTS Place.

Note II:  The Moose are in Colorado where they will continue their road trip tonight against the Eagles.  The Eagles are the only opponent from the Pacific Division that Manitoba will face this season.  Puck drop is at 8:05 PM CST.

CBC: ‘It’s almost a gimmick’: How the Winnipeg Jets are winning, in spite of lousy stats.  I’m not so sure I’d be so quick to diminish what Hellebuyck has done but the stats have not favoured the Jets this season.

The Athletic Winnipeg:  Seattle speculation makes sense but Jets coach Paul Maurice prefers to stay put.  (Paywall).  Ken got the ball rolling by asking the question in yesterday’s scrum that was on folks minds.  And he wrote that while the speculation does logically make sense ultimately he sees the Jets bench boss sticking around here in ‘Peg city.

Winnipeg Sun:  Jets Gameday – Five Keys to the Game. Paul’s big matchup is Something’s gotta give between these two evenly matched teams. His five keys to the game include: 1) Special teams. 2) Avoid a track meet. 3) The hot line. 4) Feast on home cooking. 5) Attention to Aho. 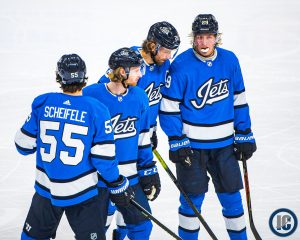 Winnipeg Sun:   Jets’ Maurice: ‘I’m not going anywhere’.  Comments like “This is my home.  I don’t want to go anywhere else” and “I’m here as long as Mark (Chipman) and Kevin (Cheveldayoff) want me to be here.  This is home for me.  I love this place.  I’m not looking to go anywhere.” will certainly endear him to the folks living here in Manitoba.

Winnipeg Sun:  Jets’ Perreault in concussion protocol.  It was interesting to hear Paul Maurice not call it a concussion on Monday.  While it clearly will require attention it sounds like 85 avoided the worst of what that hit could have delivered.

Winnipeg Free Press:  Maurice squelches Seattle coaching rumour.  (Paywall).  The Jets bench boss was pretty clear in his comments that Winnipeg is home for him and his family.

Winnipeg Free Press:  Jets heating up at home barn.  (Paywall).  Bell MTS Place is becoming a place where it is difficult for the opposition to leave with points.

The Athletic Winnipeg:  Why Jets forward Andrew Copp pursued hockey over football. (Paywall).  Michigan guys have football in their blood.  Especially when you grow up in Ann Arbor.

TSN: Pionk providing steady influence on Jets’ ever-changing blue line. There were questions about Neal Pionk’s game when he was acquired by the Jets as part of the Jacob Trouba deal but from the beginning of the season, his game seemed to suit the Jets’ style of play and he’s quickly become a key piece of a blue line that has seen no shortage of changes. Sara Orlesky reports.

TSN: Maurice on future: I’m here as long as Jets want me here, ‘this is home for me’. Jets head coach Paul Maurice is in the final year of his contract in Winnipeg and on Monday, he shot down speculation that he could become the first head coach of the expansion Seattle franchise.