Note:  The Jets took Friday off after they wrapped up the home and home series with the Stars in Dallas on Thursday night.  Now that they’ve had a recovery day they will be back on the ice today for a practice at 12 noon at Bell MTS Place as they get ready for tomorrow’s afternoon contest against the Ducks.  Be sure to check back for the Practice Report with the latest news and audio.

Note II:  The Moose hosted the Wolves last night in Winnipeg which was their first game back in the city since mid November.  The came back to win after giving up the first goal and then scoring three unanswered and almost a fourth when Mikhail Berdin missed an empty net attempt.  We also learned that Sami Niku has been sidelined for 2-4 weeks according to coach Vincent.  Today they have a re-match with Chicago at Bell MTS Place.  Puck drop is at 6 pm.

Note III:  Tune in for a special on location version at Polo Park in support of Toy Mountain of the Illegal Curve Hockey Show on TSN 1290 Winnipeg starting at 9 am.  We will have three hours of Winnipeg Jets, Manitoba Moose and NHL talk.

The Athletic Winnipeg:  Jets Notebook.  Murat writes about lifelong friendships, tough love and a captain who just wants to ‘maximize’ his team in his notebook.

Winnipeg Sun:  Grunt work has Jets sitting pretty.  It sure does appear that this team is pulling in the same direction and a lot of that push is coming from the young guns. 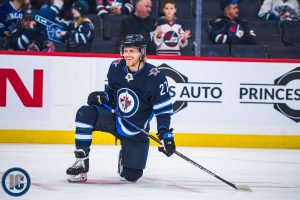 Winnipeg Free Press: Antropov forever tied to Jets 2.0. Taylor caught up with Antropov here in Winnipeg as they reflected on the team that first brought NHL hockey back to Manitoba.

Winnipeg Free Press:  Beloved former Jets captain Dale Hawerchuk overwhelmed by support from Winnipeg as he faces off against stomach cancer.  (Paywall).  Amazing the perseverance it takes to battle this disease in its many forms.  Folks in Winnipeg will be happy to hear that number 10 is doing well in the fight of his life.

The Athletic Winnipeg: How Nikolaj Ehlers has grown into the Jets’ top goal scorer. (Paywall).  Ken looks at the Dynamic Dane and how he has grown as a player.