Note:  The Jets got the road trip off to a good start with a 5-1 win over the Sharks last night in San Jose as they sit in 3rd spot in the Central Division on US Thanksgiving (approx 75% of teams in a playoff spot on this day make the playoffs).  The Jets flew to southern California where they will practice today at 3:30 pm CT as they get set for tomorrow’s afternoon contest against the Ducks.  Be sure to check out the Practice Report.

Note II:  The Moose dropped their third straight game last night in Milwaukee as the top team in the AHL beat them 6-3.  They lost Sami Niku in the 2nd period, had Andrei Chibisov score an own goal and were down 4-0 before they got things going but it was too little, too late for a comeback.  On a positive note Jets 2nd round pick in 2015 Jansen Harkins continues to produce adding two more assists last night to eclipse his previous assist high in 49 less games.  The team travels today to Michigan where they will face Grand Rapids on Friday night.

The Athletic Winnipeg: How are our preseason predictions holding up after 25 games? We decided to find out.  (Paywall).  Murat and Ken look back at their 10 predictions they made prior to the season getting underway and evaluated them after the Jets played their 25th game last night.

TSN:  Winnipeg winning as Wheeler’s role changes.  He has blended quite nicely with these two wingers.

Winnipeg Sun: Jets Hellebuyck putting up MVP performance this season.  There is no question who the MVP of this season has been to date.

Winnipeg Free Press:  Poolman returns to California a different player.  (Paywall).  When Moose bench boss Pascal Vincent told me in a scrum last season after a Manitoba game that Poolman looked like a player in a wrong league it was readily apparent that the East Grand Forks product would soon enough be making an impact at the NHL level. 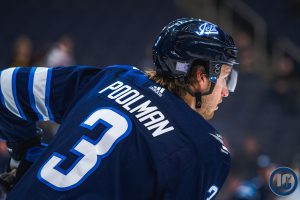 Winnipeg Free Press:  Kane continues to be Mr. Money Phone to Jets fans.  (Paywall).  Say what you will about Kane but on the ice the guy gave full effort.  I don’t really hear or see fans referencing him still unless the Jets are playing the Sharks which is something most fans do anytime the Jets are playing a player who used to play in Winnipeg although admittedly he receives more vitriol than most.

San Jose Mercury News:  Sharks look ‘lifeless’ as win streak is halted at three.  Read about the game from a writer that covers the Jets opposition.

NHL.com:  Laine has three points, Jets open road trip with win against Sharks.  A big win for a Jets team who continues to play well away from Manitoba.

The Athletic Winnipeg: Evaluating Winnipeg’s defence at the quarter-season mark. (Paywall). Murat breaks out his highlighter to hand out some grades to the goalies and defenceman of the Jets.

NHL.com:  On the Right Path.  How having a plan for after retirement keeps Grant Clitsome busy with what he loves.

The Athletic Winnipeg:  The 2010’s: Winnipeg Jets All Decade Team.  Murat and Ken present the top 6 Winnipeg Jets, per position. Left Wing might shock you. This is a must listen for Jets fans. Plus, Ken and Murat discuss some players that just missed the cut, as the Jets 2.0 celebrate their first decade back in the National Hockey League.