Note: Congrats to the Blue Bombers for a dominating win in Grey Cup 107 as they ended a 29 year drought for the City of Winnipeg with their 33-12 defeat of the Hamilton Tiger Cats.  Fans took to Portage and Main last night to celebrate the victory and the parade will be held tomorrow.

Note II:  The Jets were off on Sunday and will not skate today.  The Jets will still be in action however as they host their annual Skills Competition this evening at Bell MTS Place.  As we are every year be sure to stick with us for complete coverage of the events and be sure to follow our Instagram for pictures from the event.

Note III:   The Moose ran into a very good Toronto Marlies team who swept them this weekend and ultimately swept the season series 4-0 thanks to another win on Sunday afternoon.  Manitoba will travel today and their schedule will not get any easier as they take on the Admirals in Milwaukee on Wednesday.  They are the hottest team in the AHL going 10-0-0-0 in their last ten games.  Coach Vincent confirmed that the team will continue to use a rotation for their first year Jets D prospects.

The Athletic Winnipeg:  Which Jets are most likely to be traded in 2019-20?  (Paywall).  Murat looks at the roster of both the Jets and some of the players from the Moose and categorizes them in terms of untouchables, almost untouchable, it isn’t likely, conceivable, hard to imagine as trade centrepieces and candidates.

Illegal Curve: Updates on Josh Morrissey, Nathan Beaulieu and Laurent Brossoit.  Following the game on Saturday the biggest questions surrounded the health of this trio who didn’t finish the game against the Blue Jackets. 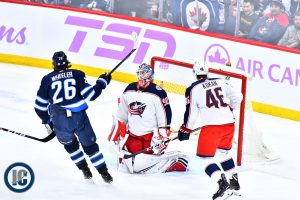