Note: It was a successful weekend for the Jets as they won both their games including yesterday afternoon’s 3-2 OT win against the Stars.  The team is off today before they complete their home stand against the Avs tomorrow.

Note II: The Moose are back in Winnipeg following a pair of back-to-back shutout wins on the road.  They’re home for four games starting today at 4:00 pm when they take on the Stars (of the AHL variety).

The Athletic Winnipeg: Jets’ Jack Roslovic on his unique career arc, his ideal role and trick shots gone wrong. (Paywall). Murat conducted this Q & A with the Jets ‘other’ 1st round pick back in 2015.

NHL.com:  Laine works to become complete player with Jets.  Based on our chat with Sean Tierney of Charting Hockey on Saturday’s Illegal Curve Hockey Show he is already there (based on WAR – wins above replacement which factors in all contributions).

TSN:  Hellebuyck keeping the Jets afloat.  Yost looks at the numbers for the Jets team and why their netminder if the guy who is keeping this team in the hunt.

Winnipeg Sun: Jets fight back to dump Stars in overtime.  A recap of the action from yesterday afternoon. 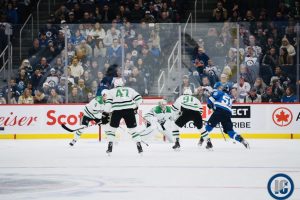 Winnipeg Free Press: Scheifele’s OT marker snags win against Stars.  Laine scoring against the Stars seems automatic although these days those goals coming on the power play isn’t so automatic.  Perhaps the dam has broken.

CBC:  Jets snap Stars’ win streak thanks to Scheifele’s fast-flying OT winner.  He tied the franchise record for most OT winners (nine) with his goal early in OT on Sunday.

Illegal Curve:  Chatting about the Winnipeg Jets with Murat Ates of The Athletic Winnipeg.  Topics included Wheeler’s move to centre, play of Jack Roslovic, composition of the PP units, Jets top six of D, if reassignment of Heinola is right move for his development & Hellebuyck’s play.