Note II:  The Jets and Blues looked like they were set to head to OT to decide the winner after St. Louis erased a two-goal deficit in the 3rd period but somehow the home side didn’t lock it down with seconds remaining in the game and the visitors won it with 15 seconds left which gave them a 3-2 win and a 3-2 series lead.  Today they have a player availability scheduled for 11:00 AM followed by a team meeting at 12 noon and then coach Maurice will speak before the team leaves for St. Louis ahead of game 6.  Stay tuned for the Playoff Practice Report for any updates including news about Nikolaj Ehlers who left the game late in the 3rd after blocking a shot.

Winnipeg Sun:  Jets blow another lead, face elimination.  Ken breaks down the game from his perspective inside Bell MTS Place.

Winnipeg Sun:  Maurice suggests Game 4 was Laine’s best game ever.  He has certainly looked like he has added a move or two to his repertoire for the post-season.

Winnipeg Free Press:  Jets squander yet another early lead, lose 3-2 to Blues in Game 5 stunner.  (Paywall).  It went from jubilation inside Bell MTS Place to a distraught feeling which is best summed up by the picture below. 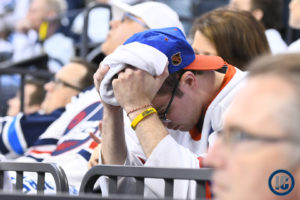 St. Louis Post-Dispatch:  Blues score 3 goals in third period for 3-2 win in Game 5.  (Survey Required).  A look at the game from the perspective of someone who covers the Jets opposition.

St. Louis Post-Dispatch:  This Blues team keeps proving us wrong.  (Survey Required).  Another look at the game from the perspective of a Blues writer.

Sportsnet:  Jets’ failure to show up at home pushes them to brink of elimination.  Fans did their part throughout the game but the team they were cheering for didn’t do what they needed to do in that 3rd period in order to send them home happy.

Sportsnet:  Why Brayden Schenn’s controversial goal call was the right call.  Was it really controversial?  Seemed pretty clear that it was a goal from inside Bell MTS Place.  As I tweeted last night fans ire should have been directed towards the defensive play of the players on the ice.

NHL web site:  Jets’ third-period woes continue in Game 5 loss to Blues.  A goal against with 15 seconds left in the game.  It was like deja-vu for those who have been watching this Jets team this season. 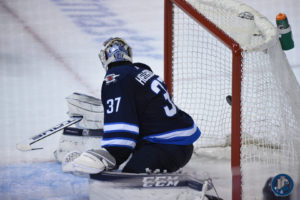 TSN: Should Schenn’s tying goal have counted? Brayden Schenn scored the tying goal for St Louis in the third period as the net was being dislodged by Oskar Sundqvist being thrown into it by Dustin Byfuglien. Should it have counted? Sara Orlesky and Daren Dreger share their thoughts on that and more.

TSN: What led to the Jets’ collapse? The Jets gave up three goals in the third period to drop Game 5. What turned the tides for the Blues? Was the tying goal legit? TSN Hockey analyst Jamie McLennan has more.

TSN: Binnington’s composure primes Blues for comeback win. The Jets might’ve beaten Jordan Binnington with two early goals, but as Jamie McLennan points out, it was his composure after that and a few key saves that kept it a two-goal game and allowed his Blues to mount another comeback in Winnipeg.