Note II:  The Jets won the all important game three last night in St. Louis by a final score of 6-3 to get back into this best of seven series.  Today they will have a media availability (11:30 am) and a practice (12:30 pm) in St. Louis so be sure to check out the Playoff Practice Report for an update with the latest news and audio.

Note III:  The Moose concluded the 2018-19 season with a 6-2 win over the Wolves which saw them fall just two points out of a playoff spot.  Lots of firsts in the game as Cole Maier, Jets prospect Johnathan Kovacevic and Winnipegger Kamerin Nault all scored their first AHL goals.  Today the team will hold exit meetings as they wrap up the season.  Some players will end up recalled to the Jets to form a Black Aces squad while others will head home.  We’ll have it all covered on site.

Winnipeg Sun:  Jets land punch to the kisser.  It was a game they had to win (captain Obvious) and the Jets got it done.  Paul reflects on the game last night from his spot inside Scott Trade.

Winnipeg Sun: Offensive onslaught puts Jets on board.  Five different goal-scorers for the Jets (Connor x2, Hayes, Laine, Tanev, Byfuglien) from up and down the lineup was just what the doctor ordered to get this team back in business. 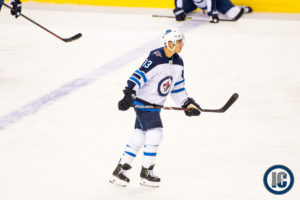 Winnipeg Sun: Hayes starts outburst for Jets, scores first of playoffs.  The Jets needed 12 to get going in order to have success in the playoffs.

Winnipeg Free Press: Jets dominate Blues, jump back into series. (Paywall).  Mike recaps the action which saw Winnipeg get back into this series with a must win game in St. Louis.

St. Louis Post-Dispatch:  Performance in Game 3 was un-Blues-like.  A view from someone who covers the Jets opposition.

St. Louis Post-Dispatch: Blues warble a sour note, fall to Jets as Winnipeg climbs back into series.  A recap of the game by someone who covers St. Louis

Sportsnet:  Jets turn tables on Blues with familiar brand of hockey.  Have the Jets found their identity?

NBC Sports:  Jets claw back in series vs. Blues with big Game 3 win.  Scott with another game recap.

TSN: Jets stick to game plan to wear down Binnington and Blues. After dropping the first two games of their series against the Blues at home, the Jets came out flying in Game 3 on the road and despite a hot start by Jordan Binnington, they stuck with the game plan to pick up the bounce back victory. The TSN Hockey panel discusses, weighs in on the impact that Kevin Hayes had on the game in his limited minutes and talks about Patrik Laine’s focus and involvement in this series.

TSN: Jets hit the Blues where they were the most vulnerable. The Blues have shown that they are the most vulnerable in their own defensive zone and in Game 3, the Jets took advantage of St. Louis’ slower defenceman to pump in six goals. Craig Button explains how Winnipeg’s quick and agile forwards managed to enter the zone and cause a lot of problems for the Blues and breaks down Dustin Byfuglien’s impressive play.