Note II:  The Jets held an optional on Thursday as they got ready for tonight’s game two game against the Blues at Bell MTS Place.  With it being a later game than normal the morning skate gets underway for Winnipeg at 11 AM so be sure to check out the Winnipeg Jets pre-game report for the latest news and audio.  Puck drop is at 8:30 pm.

Note III:  Over in Michigan the Moose have a HUGE game against the Griffins to kick off three games in three days to conclude the regular season.  Puck drop is at 6 pm. 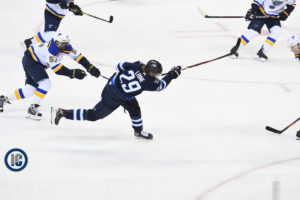 Winnipeg Sun:  Jets buckle up for Game 2.  Time to put on the big boy pants as this game is gonna basically be must win with the way the Blues have been playing.

Winnipeg Free Press:  Jets hope Hoosli good luck against Blues in Game 2.  (Paywall).  If anyone can bring that place to the next energy level it is this choir.

Winnipeg Free Press: Now you see him, now you don’t: Jets need bigger contribution from Hayes. (Paywall).  Lots on the shoulders of him and his linemates.

Winnipeg Free Press: Jets disappointed, not distressed, after Game 1 loss to Blues. (Paywall).  Just have to look back to last season’s defending Stanley Cup champs to see a team that didn’t have the start they were expecting.

Sportsnet:  Jets can’t lose all-important ‘belief’ battle ahead of crucial Game 2.  The Blues come into tonight’s action pretty calm, cool and collected while the Jets know just how important this contest is for them.

Globe and Mail:  Third periods have been a pain for the Winnipeg Jets this season.  Kinda a shock to see a team go from what the Jets did last season in the final frame with a lead and what the present incarnation does with one although as they would say it is a different team this year.

Grand Forks Herald:  What is Tucker Poolman’s future with the Winnipeg Jets? (Survey Required).  My answer would be a long one based on how he played this season for the Moose.  Especially as this D roster will likely get a shakeup next season.

TSN: Jets not lacking confidence heading into Game 2.  It wasn’t the result they were looking for, but the Jets haven’t lost any confidence following their Game 1 loss to the Blues. Sara Orlesky has more on how the Jets are moving forward.