Note:  The Jets take on those bunch of jerks in Carolina as they look to quash the post-game Storm Surge with a victory by the road team.  It won’t be easy against a Carolina team that is 8-1-1 in their last 10 games.  While it is expected that Adam Lowry and Bryan Little will play tonight based on yesterday news from practice it will be worth paying attention to morning skate for Winnipeg which gets underway at 10:30 AM CT and you can be sure to check out the pre-game report for the latest lineup news and audio.

Note II:  The Moose are scheduled to hit the ice out at the IcePlex for a third straight day of practice as they get set for a massive six-game homestand which could make or break their season.  It all begins with tomorrow’s game against the IceHogs with puck drop at 6 pm.

Winnipeg Sun:  Can the penalty kill get back on track in Carolina?  The good news for Winnipeg is you go from the top ranked (Tampa) power play in the NHL to Carolina’s 22nd ranked power play so perhaps a bit of a reprieve.  Ken’s big matchup is Patrik Laine vs Sebastian Aho. His five keys to the game include: 1) Red hot Blake Wheeler. 2) Mr. Consistency Justin Williams. 3) Fix the PK woes. 4) The return of Adam Lowry. 5) Power forward Michael Ferland. 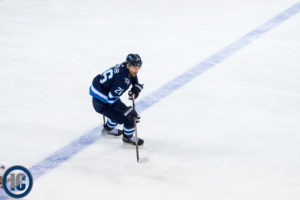 Winnipeg Sun:  Jets goalie knew he’d be back after taking shot in mask.  The blow to the mask happened Tuesday night but the reverberations were still being felt on Wednesday after the Jets got off the ice.

Winnipeg Free Press:  Cherry! Burke! Take cover… there’s more fun in the forecast.  (Paywall).  Count me as someone who has no problem with the Storm Surge.  I don’t see why folks feel they have the right to dictate how a particular market should act.

Winnipeg Free Press:  Suspension served, but virus may keep Lowry out of Jets lineup.  (Paywall).  Sounds like the Jets room has been dealing with this for awhile and Lowry is just the latest victim of the bug.

The Athletic Winnipeg:  How to get the struggling Jets playoff ready — The Solutions.  (Paywall).  Murat first looked at the problems and part two of this series looks at the solutions as this team has a month left in their regular season and should be getting ready to hit that next level.

Radio voice of the Jets Paul Edmonds joins the Sun’s Ken Wiebe to discuss the teams loss in Tampa Bay and how the deadline pick ups are fitting into the lineup.