Note:  The Jets won big last night as they crushed the Ducks by a final score of 9-3 at Bell MTS Place.  Jack Roslovic had a night to remember with the hat trick (all on the power play) and also an assist for his first ever NHL four point game.  The team will have a day off today as they get set to face off against the Sharks on Tuesday night to finish off the three-game home stand.

Note II:  The Moose were looking to keep the good feelings going after they had won in OT on Friday night but the good times didn’t keep rolling on Saturday night in Chicago as they lost to the Wolves 5-2.  On a positive note for the Moose Seth Griffith’s points streak hit 11 games (1G 14A) and he moved into sole possession of most points on Manitoba. Also Tucker Poolman hit a new career high in points.  Today the team is travelling and therefore there is no availability.

Winnipeg Sun:  Jets throttle Ducks, set franchise record.  It was a wild one in Winnipeg.  Let Ken give you his thoughts. 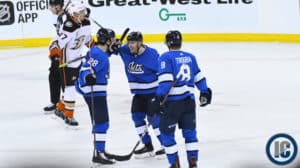 Winnipeg Sun:  Petan keeping open mind: Jets forward could be moved before deadline.  I thought he handled the questions this morning quite well given the circumstances.

Winnipeg Free Press:  Jets annihilate sitting Ducks.  (Paywall).  Where does one even start after last night’s contest?  Mike breaks it all down.

Orange County Register:  Ducks return from 9-day break and give up 9 goals in loss to Jets.  Read about the game from the perspective of someone who covers Anaheim.

TSN: Button on how Jets’ high level of play simplifies things for Cheveldayoff. The Jets collected their seventh straight home win in impressive fashion, putting nine goals past the Ducks and as Craig Button explains, when the team is playing at such a high level, it makes it clear what their strengths are and gives management a more focused idea of what they need moving forward.

Sportsnet:  Jets, Bruins both ‘stand up for themselves’.  The duo of Ron and Don were discussing the Jets and their recent opponent in last night’s intermission.

Topics: Jets/Blue Jackets Recap. Jets shopping Nic Petan; teams asking about Jack Roslovic. How can the Jets get Patrik Laine going again? A look at the trade between the Penguins and Panthers.

Topics:  Previewing Jets/Ducks. The surprise season of the Montreal Canadiens.  A visit from former producer Tim Debenham and some Ez-capades from the past.  What can Oscar Klefbom’s return do for the Oilers?  Cheers/Jeers.