Note:  The Jets were in British Columbia on Friday but didn’t hold a practice so we will have to wait to see if there will be any further changes to the lineup.  Coach Maurice indicated after the game in San Jose on Thursday that he was hoping to have Adam Lowry back in the lineup tonight.  Check out the pre-game report for the latest news and audio ahead of the game with puck drop at 9:00 pm.

Note II:  Last night the Moose and Griffins battled it out evenly for the first 40 minutes of the hockey game but in 2 minutes and 13 seconds early in the 3rd the visitors scored three times to take a 4-1 lead.  Manitoba has now lost four straight games.   The Moose conclude the pre-Christmas portion of the the schedule with an afternoon re-match against the Griffins at Bell MTS Place.  Puck drop is at 2 pm.

Note III:  Reminder that there is no Illegal Curve Hockey Show today on TSN 1290 Winnipeg.  We are back in action next Saturday at 9 am.

Winnipeg Sun:  Goaltending was in the bloodstream of Jets backup.  There has certainly been no regret to the signing of Laurent Brossoit. 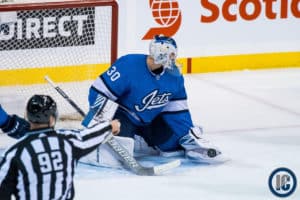 Winnipeg Free Press:  Appleton eating up the minutes with Jets.  (Paywall).  As someone who has watched him rise from a kid just trying to make the Manitoba Moose last season and then proceed to earn more and more ice time ultimately ending up on the top line and AHL rookie of the year, I am not really surprised that he has transitioned so well.

Winnipeg Free Press:  How do the Jets keep winning? Well… it’s complicated.  (Paywall).  Mike tries to make sense of what we are seeing here in Peg’ city with this Jets team this season.

Winnipeg Free Press:  Jets could use upgrade at fourth D-spot, but only if price is right.  (Paywall).  For a team looking to go late into the spring might Winnipeg be thinking of acquiring some additional D depth?  Andrew takes a look at this idea.

Global News:  Jets unveil hockey video game competition.  Not gonna lie.  I didn’t know what ‘chel stood for and had to look it up on Urban Dictionary.  I’ll stick to NHL 94 and Blades of Steel.

Sportsnet:  18 memorable Winnipeg Jets moments from 2018.  Would those be your 18 moments from the past year?