Note:  The Jets complete the fourth and final game of this home stand against a hot Edmonton Oilers team tonight at Bell MTS Place.  They held a highly optional practice on Wednesday so we shall have to wait to see what, if any, changes they might make ahead of the game against Edmonton.  Be sure to check out the pre-game report at 10:30 am for any and all updates.

Note II:  After spending their morning volunteering at Siloam Mission on Wednesday the Moose are back on the ice today as they continue to practice ahead of their game against the defending Calder Cup champion Marlies tomorrow night.

Winnipeg Sun: Reckoning coming for the Jets.  Are not all two points created equal?  Paul looks at the strength of the Jets schedule to date.

Winnipeg Free Press:  Improved Oilers bringing ‘A’ game to Winnipeg.  (Paywall).  The Oilers are the only NHL team that has experienced  a positive bump after replacing their head coach of all the squads who have already done so this season.

Winnipeg Free Press:  Jets focus on playoff push in ultra-competitive Western Conference.  (Paywall).  While the Jets have been on a nice roll the reality is that they haven’t given themselves an insurmountable cushion so they cannot afford to get complacent.

Winnipeg Free Press:  Dynamic defence duo key to fruitful Jets future.  (Paywall).  Missed this one from Mike the other day but an important topic for the Jets when you look at the long term competitiveness of this team. 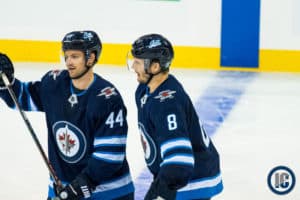 Sportsnet:   Connor Hellebuyck back on track as Jets make case as West’s best.  Not bad considering this team is still searching for that top level game for a full 60 minutes.

Hockey writers Ken Wiebe and Scott Billeck discuss the Jets resurgence on the power play and their recent performances during their homestand.

The Athletic: Breaking down Jets prospect Declan Chisholm’s breakout campaign with Petes. (Paywall).  Always good to gain some insight on players in the prospect pool that you don’t hear about.