Note: Finally a game day as the Jets will play their first game since last Friday tonight against the Colorado Avalanche at Bell MTS Place to kick off a four-game home stand.  The lines and D pairs have been fairly consistent all week so we aren’t anticipating any changes but as always be sure to check out the Jets pre-game report in advance of tonight’s contest.

Note II:  The Moose and Griffins were locked in a 1-1 tie through 40 minutes last night with Eric Comrie standing on his head in the Manitoba net.  The 3rd period saw Grand Rapids put three into the Moose net and take it 4-1 in the first meeting since Manitoba eliminated the Griffins from the 1st round of the playoffs last season.

Winnipeg Sun:  Five things to watch on gameday.  Includes: 1)  Starting on time. 2) Minimizing the damage. 3) Powerful Stuff. 4) Stay in your Laine. 5) Welcome back.

Winnipeg Sun: Scheifele enjoys watching MacKinnon line as Jets centre relishes match-up with Avs’ best. Lots of responsibility in a game like this one on the shoulders of the Jets top centre. 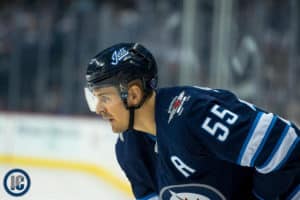 Winnipeg Sun: Brossoit ready for next test, Jets backup stays sharp despite long layoff.  Life as a backup cannot be easy but the Brossoit has handled himself well this season in this role.

Winnipeg Free Press:  Top Avs trio still respected despite rare off night.  (Paywall).  Considering what they’ve been able to do this season you take them lightly at your own peril.

Winnipeg Free Press:  Brossoit a keeper as Jets’ backup.  (Paywall).  He is everything you want in a backup including consistent when given the opportunity and the consummate team player when not in net.

Winnipeg Free Press:  Dump & Chase.  (Paywall).  Mike and Jason are reunited and bringing you a variety of topics in their fun weekly column collaboration.

TSN: Jets searching for 5-on-5 scoring solutions. While the Jets’ power play has been off the charts this season, their five-on-five scoring has been near the bottom of the league. Sara Orlesky has more on what Winnipeg is trying to do to make it better.