Note:  The Jets were off on Sunday after a big 5-3 win on Saturday afternoon against the Coyotes.  Today they have a game against division rival St. Louis who have struggled since their season opening loss to the Jets although they are coming off a 4-1 win over the Leafs on Saturday.  The morning skate is at 10:30 am and you can check out our pre-game report for a full update.  Puck drop is at 7 pm and we will have all the action covered.

Note II:  The Moose are feeling good about themselves after a successful weekend which saw them beat the Rampage 4-1 on Friday which they followed up with a 6-3 win on Sunday.  Mason Appleton had a massive game in the re-match posting his first ever professional hat trick (while adding two assists) and Eric Comrie has won three straight making at least 31 or more saves in those victories.  The team is off today.  They will practice in Winnipeg starting on Tuesday before they head out on the road for three games on Friday.

Winnipeg Sun:  Jets defenceman Josh Morrissey finds offensive groove.  Morrissey is a player that has all the tools to be a star in the NHL at both ends of the ice and with his opportunities on the power play that may become a reality this season. 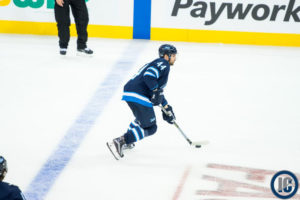 Winnipeg Sun:  Five keys to Jets vs Blues.  Ken sets up tonight’s game with his keys to the game and his big matchup.

Winnipeg Free Press:  Morrissey on steady rise to stardom.  (Paywall).  Remember when he was a bust because he spent time in the AHL?  This is why you don’t rush to judgement.

St. Louis Post-Dispatch: For one game, at least, all systems go for Blues. (Requires survey). Learn more about the Jets opponent.

St. Louis Post-Dispatch.  Blues at Jets preview. (Requires survey).   A look ahead to tonight’s game from the perspective of someone who covers the Blues.

The Athletic St. Louis: After dynamic defensive performance without him, will Blues scratch Jay Bouwmeester again? (Paywall). Had to double take when I read that headline. Longtime beat writer Jeremy Rutherford has more on the veteran blueliner.

Illegal Curve: Moose quash the Rampage 6-3 powered by a five point night for Appleton. Peter provides you with his insight into yesterday afternoon’s game including a scoring summary, a prospect watch and post-game audio from Mason Appleton, Kristian Vesalainen and coach Vincent.

Winnipeg Free Press: Appleton shines with hat-trick in Moose win. (Paywall). Sitting in the pressbox yesterday you could see that Appleton was ready to fly from the puck drop. He erupted for the biggest game of his pro career and Jason has more from his seat in the game.