Note:  The Jets won’t skate this morning since they play at 3 pm when they face the Coyotes in the fourth game of this six-game homestand.  Be sure to check out yesterday’s practice report for insight into what the Jets will look like for today’s contest.  Following the game be sure to check back for our post-game recap.

Note II:  The Moose won 4-1 against the Rampage last night and will hit the ice for a skate today as they prepare for a 2 pm re-match with San Antonio on Sunday.

Note III:  Tune in for three hours of Winnipeg Jets, Manitoba Moose and NHL talk on the Illegal Curve Hockey Show on TSN 1290 Winnipeg starting at 9 am.

Winnipeg Sun:  Not enough minutes to go around for talented Jets.  It is a problem but if they can start rolling four it would be a good thing. 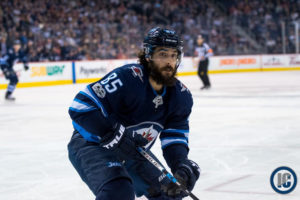 Winnipeg Free Press:  Jets get solid effort from all four lines against Canucks.  (Paywall).  Especially important when you consider how long the season goes.

The Athletic: Eric Duhatschek’s Notebook. (Paywall). One aspect of his notebook looks at Bryan Little and on how the Jets digest a tough loss.

TSN 1290 Winnipeg:  We’re trying to make the most of our chances. Winnipeg Jets forward Adam Lowry joined Rick Ralph and Brandon Rewucki on the Afternoon Ride. They discussed the Jets win vs. Vancouver, his line’s performance to start this season, how to slow down Connor McDavid, the toughest players to play against and pregame routines.